Servette vs Lugano – Preview, and Prediction

Servette vs Lugano – Lugano beat Young Boys 3-1 on Saturday to close the gap on third place in the Swiss Super League. Lugano have three games left to finish third and qualify for the UEFA Europa Conference League next season.

The team led by Mattia Croci-Troti will compete in the Swiss Cup final on Sunday against St. Gallen. In Gameweek 34, Croci-men Troti’s will travel to Lancy to face Servette at Stade de Geneve, looking to build on their weekend triumph over Young Boys. Servette have been on the beach for a while now, having secured another top-flight season.

So Alain Geiger’s team lost four games in a row in Super League. They have only scored one goal. Servette surrendered four consecutive goals to Luzern on Sunday afternoon. On the other side, Lugano have conceded two or more goals in each of their last three league away games. Only one of their previous seven meetings saw three or more goals.

We think it’s time to end the low-scoring trend in this game. Lugano needs points more than their opponents and will be more motivated. Considering Lugano conceded seven goals in two previous away defeats against Lausanne Sport and St. Gallen, we expect the hosts to score today. 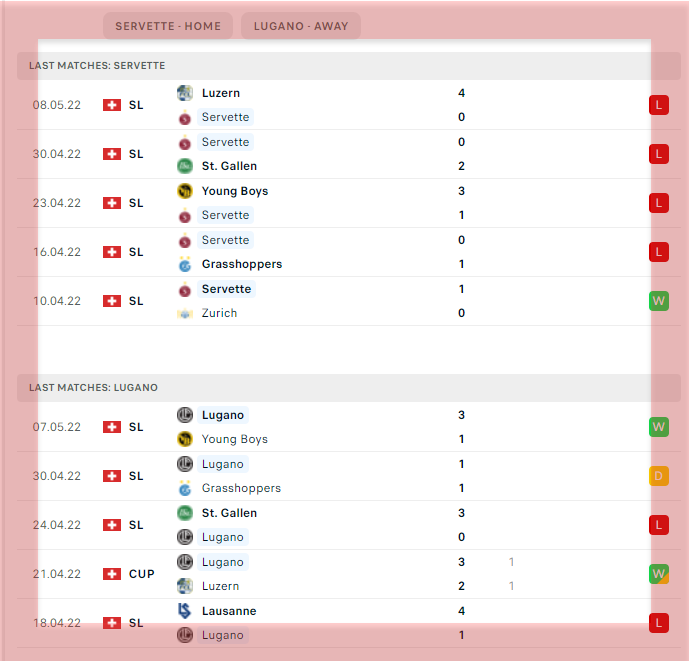