Fortuna Sittard vs Vitesse – At the moment, Fortuna Sittard is close to the bottom of the table and could be sent down. They are not out of danger yet because they are only three points away. Still, their recent form looks good enough.

In their most recent league game, Sittard won 1-2 on the road against Twente. It was their fourth win in a row in the league in their last five games. After how they’ve been doing in the league lately, they’ll have enough spirit.

Vitesse, on the other hand, has won enough games without losing to move into the safe zone of the league table. They have 47 points, which puts them in sixth place in the table. They feel pretty safe in it, and their future results won’t raise or lower their status.

In their most recent league game, Vitesse lost at home to Heerenveen by a score of 1-2. It was their third loss in the league in the last five games. They will be hoping to have a good game in this match to boost their confidence before the Playoffs.

Vitesse has not lost to Fortuna Sittard in the last five games they have played against them. The match in the other direction ended in a 1-1 tie. In seven of the last ten head-to-head games between these two teams, both teams scored.

Sittard has been playing well at home lately. Three of the last five league games they played at home, they won. Their defense was so good in those three home games where they won.

On the other hand, Vitesse haven’t lost any of their last four road games in any competition. They have recently played away games like the Europa League that were tough.

On top of that, Vitesse has been doing well against Sittard in recent matches. After looking at all of these numbers, we think that Vitesse has a better chance of winning. Given how these two teams are doing right now, it will be a very tough match. 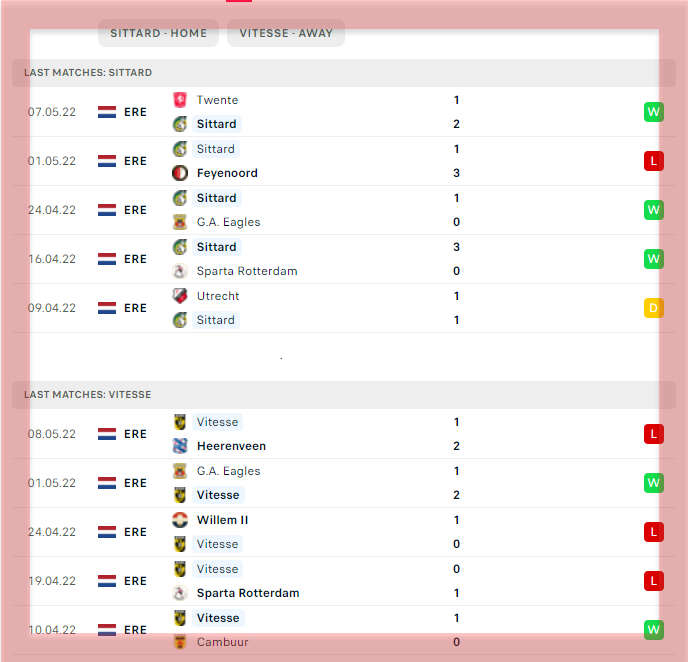