Cambuur vs Willem II –  Cambuur lost points in many of their recent games, which hurt their chances of getting into the safe zone. The way they look now is not very impressive. But their chances still aren’t over. So, if they want to stay in the league, they must do their best in the next league game.

In their most recent league game, Cambuur and Waalwijk played to a 1-1 draw at home. With that draw, they have now gone eight league games without a victory.

Willem II, on the other hand, has had a disappointing season so far. Because they often put up bad scores, they fell to the second-to-last spot, which is inside the relegation zone. They have a bad lineup on both offense and defense.

Willem ll have been doing their best to get better recently. In the last five league games, they lost a couple of times. Their last league game at home was against Heracles, and they won by a score of 2-0. They will want that win to mean something.

In the first game, Cambuur won by a score of 1-3. Both teams to score bets have paid off in 4 of the last 5 times these two teams played each other.

Willem ll has scored in all seven head-to-head games against Cambuur at this site.

Cambuur’s recent home recordings also show that the band is in a general decline. They haven’t won any of their last four league games at home. Three of them didn’t turn out the way they wanted. They won’t be in a good mood, but they can’t give up at this point.

Willem II, on the other hand, has been losing a lot on the road lately. The last 11 league games they played on the road, they all lost. This version of Willem ll will give Cambuur good things to look forward to.
Based on the above statistics, we think Cambuur will beat Willem ll in their Eredivisie match on Wednesday. 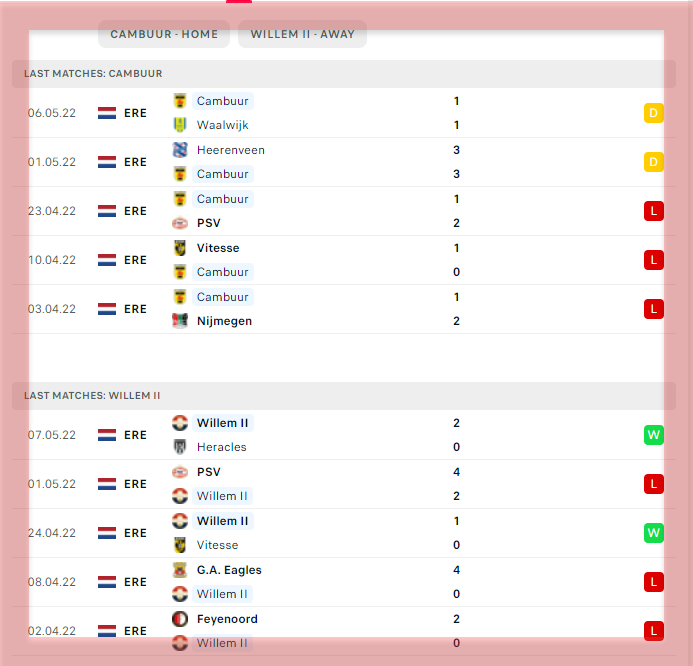