Ajax vs Heerenveen – Preview and Prediction

Ajax vs Heerenveen – Ajax‘s spot at the top of the table is now more or less safe. They are four points behind PSV, which is in second place, and they will try to make the gap even bigger by getting points in their last two league games this season. Their strong lineup on both offense and defense could help them get more points.

In their most recent league game, Ajax and Alkmaar played on the road and tied 2-2. Before the above draw, they had won their last seven league games in a row. They will be hoping to get back to winning and have a good last few games of the season.

Heerenveen, on the other hand, have been going up and down in the league lately. Even though they are in the safe zone, their position is in danger because they have the same number of points as Nijmegen, which is outside the zone. They still have two games to play, so they will try to get some points to make sure of their spot.

In their most recent league game, Heerenveen won 1-2 on the road against Vitesse. It was their fourth league win in the last ten games. Six games without a win isn’t that great for a team on the edge of the zone.

Ajax has always won when these two teams have played against each other.

Heerenveen has lost seven straight head-to-head games against Ajax. Nine of the last 10 head-to-head matches had a lot of goals.

It has been a while since Ajax went home without a league win. This year, they have won all of their home league games. With this kind of track record, they will be in great spirits and full of confidence for their last league game at this venue.

Heerenveen’s away recordings, on the other hand, don’t offer anything that Ajax can’t beat. They haven’t won any of their last seven league games on the road. Both their defense and their offense look weak.

Based on the above stats, we think that Ajax will easily beat this Heerenveen team when they meet on Tuesday in an Eredivisie match.

Ajax vs Heerenveen – Head To Head 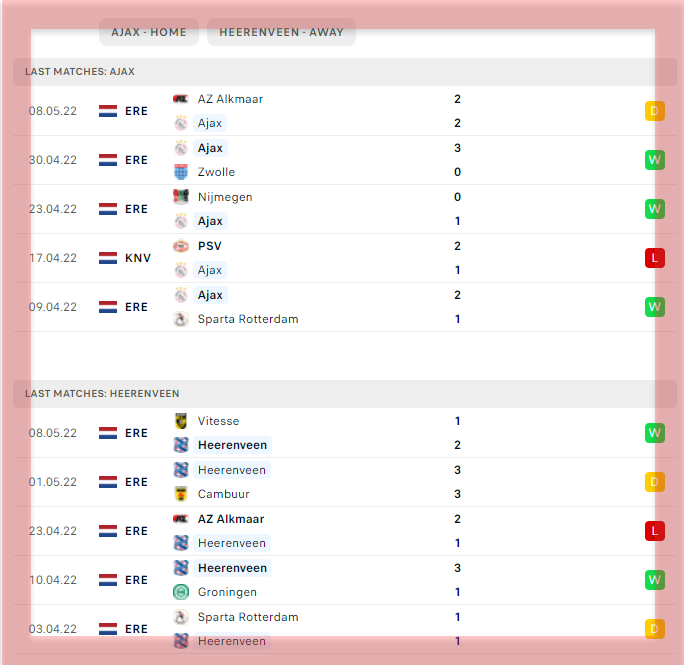