Santos FC vs Ceara – Santos has performed admirably in their games since the beginning of the season. The team has three victories, two defeats, and one draw from six games played. With ten points from their matches, they are now ranked fifth in the league table. The club has scored over 1.5 goals in all of its wins.

Santos’ most recent match was against Goias, in which Goias scored the game’s sole goal, leaving Santos goalless. The game ended with an FT score of 1-0.

Ceara‘s season has been off to a difficult start. Only one of the matches they have played so far has resulted in a win. The team has also gone winless in their last four matches. With only four points from their matches, the squad is now at third from the bottom of the league.

Ceara’s most recent match was against Flamengo. Both teams scored two goals in the encounter, which ended in a 2-2 FT draw.

The previous h2h concluded in a 0-0 draw. Santos has a perfect record versus Ceara at home. In the entire h2h series, Ceara has only won twice.

Ceara will have a difficult opponent in Santos in the forthcoming match. Santos has won three of its last six games, while Ceara has not won in its last four. The visitors were on a three-match losing streak in which they failed to score more than 1.5 goals.

Santos’ home matches have yielded positive outcomes for the team. They have won three home games in a row this season and will look to keep their winning streak going in the coming weeks. They’ve also scored at least 1.5 goals in each match. Ceara has only travelled on two occasions this season. The squad won the first match, but lost the second one.

We can anticipate Santos winning the match because they are the better team of the two and have the advantage of playing at home. Santos is also expected to score over 1.5 goals in the matchups. 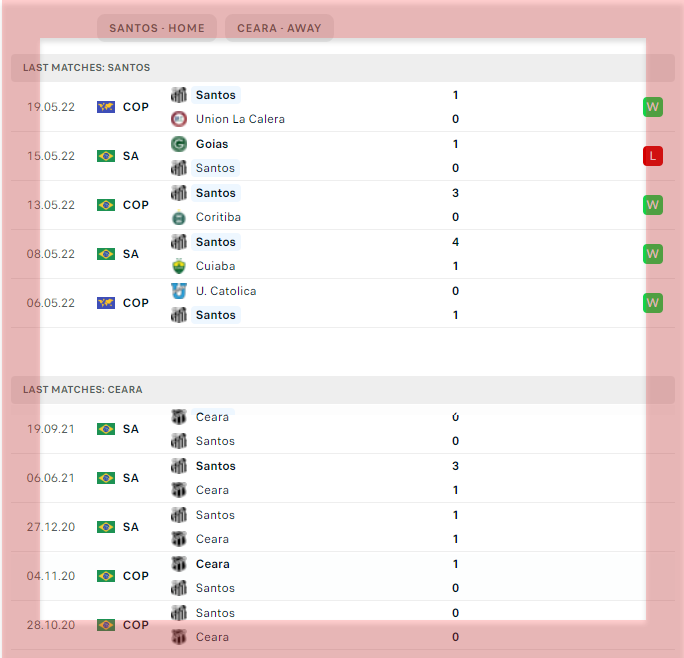