Gent leads the standings with 43 points, seven points ahead of the second-placed team, Genk. They only lost one of their five games in the Conference League Group, winning the other four in a row. The hosts have already qualified for the Play-Offs, therefore this game is only to round out the schedule.

In the previous match, the hosts defeated Genk 2-0 for their fourth consecutive victory. With that win, they have secured a berth in the Playoffs, and the pressure is now off them. In the last five games in this group, they have only conceded three goals while scoring eight.

Sporting Charleroi, on the other hand, is in third place on the standings with only 31 points. They won and drew once in the group’s five matches, while losing three times. With 11 goals conceded, they have the worst defensive record in the Play-Offs, while their attacking front has scored eight times.

After a four-game losing streak in the Conference League Play-Offs, Charleroi defeated KV Mechelen 3-2 in their last match. At least three goals have been scored in five of the past six games featuring them, with the visitors averaging 1.83 goals per game.

Gent has won three of their past five head-to-head meetings, while Charleroi has won once. In four of their last five h2h matches, at least three goals were scored. Gent triumphed 3-1 in the reverse fixture.

The home team has won four of their past five home games while keeping a clean sheet in each of them. Gent have won four games in a row and have already qualified for the Play-Offs.

Meanwhile, Charleroi has lost all three of its away games, surrendering a total of eight goals. In addition, they failed to score in each of them. The visitors were even defeated 3-1 in the revere match.
Expect the hosts to win on Saturday, based on the current situation. 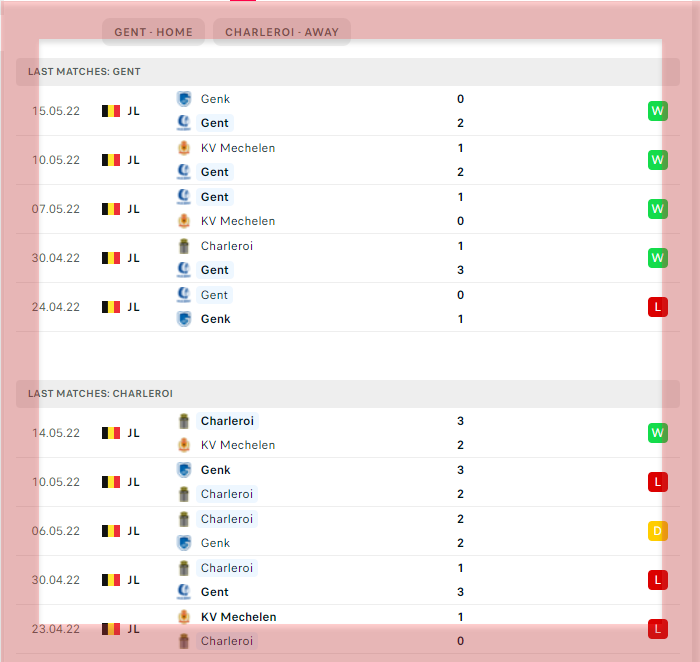