River Plate vs Cuiaba – River Plate of Uruguay will meet Cuiaba of Brazil at Estadio River Plate in Round 5 of the Copa Sudamericana in Group B on Wednesday in what will be a fight of the bottom half.

Cuiaba is in third place in the Copa Sudamericana, with three points after four games. They only won once and lost three times. The Brazilians are coming off a 1-2 defeat to Racing Club in their previous match. It was their third straight defeat.

Cuiaba has seven points after six games in Brazil’s Serie A. They come into this match after losing 2-1 to Sao Paulo in their previous league game. That was their third loss in a row, and they’ve been giving up goals lately.

River Plate, on the other hand, is last in the Copa Sudamericana with just three points from four games. They only won once and lost three times.

The Uruguayan team fell 1-2 to Melgar in their last game here, and they have the lowest goal-to-conceal ratio (3:6) thus far. After 12 games, River Plate leads the Uruguay Primera Division – Apertura with 19 points.

They are coming off a 1-0 home win over Rentistas, which broke their three-game losing streak in the league. They only met once in the opposite match, which River Plate won by a score of 2 to 1.

River Plate has lost both of their home games this season, 0-1 against Racing Club and 2-1 to Melgar. They are now on a six-game unbeaten streak in the league, but they were unable to replicate that intensity in this European competition.

Cuiaba, on the other hand, has lost their last two league away games, allowing a total of six goals. They also fell 0-2 to Racing Club in the Copa Sudamericana away encounter. They are still the only team in the group without a road win.

It will be difficult for both teams to win as River Plate lost both of their home games and Cuiaba lost their away game. Since the hosts won the reverse match, we believe a repeat could occur here on Wednesday. 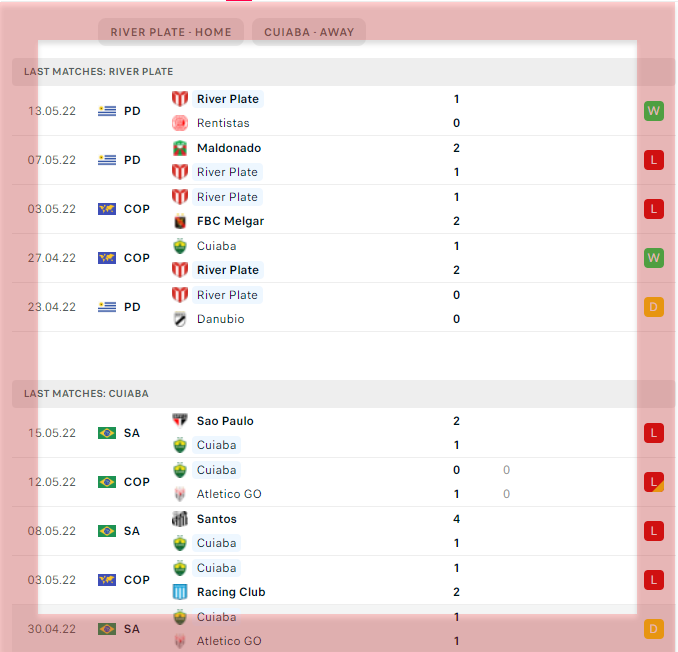