Haka vs SJK – Preview, and Prediction

Haka vs SJK – Haka has started the season with some solid performances. However, they were unable to retain their early momentum. Such a drop in performance is not particularly impressive. They’ll be looking to get back on track in the following league games with the help of home advantage.

In their most recent league match, Haka were defeated 2-1 by KuPS on the road. Following that loss, they went on to lose three more games in the league. They’ll be hoping to snap out of their funk.  SJK, on the other hand, has had a slow start to the season. Their lacklustre recordings have pushed them down to 11th place on the list. In any case, they have rebounded from their recent performance with a strong showing.

In their most recent league match, SJK defeated VPS 1-0 on the road. They had lost five of their previous six games before scoring the aforesaid league victory. Their hopes are high that this triumph will help them acquire some consistency.

With the exception of their recent 0-2 loss to VPS, Haka’s home record is superb. Before the above setback, they were on the strongest lane. In each of those games, their offensive unit scored two goals.

Haka will undoubtedly be hoping to reclaim their winning form at home. Their previous high-scoring head-to-head victory over SJK may have given them the motivation to win another. SJK, on the other hand, has lost three and won one of their four league road games this season. In each of the three poor outcomes, they leaked two or more goals. The aforesaid evidence leads us to believe that the home team will win their Veikkausliiga match against SJK on Tuesday. 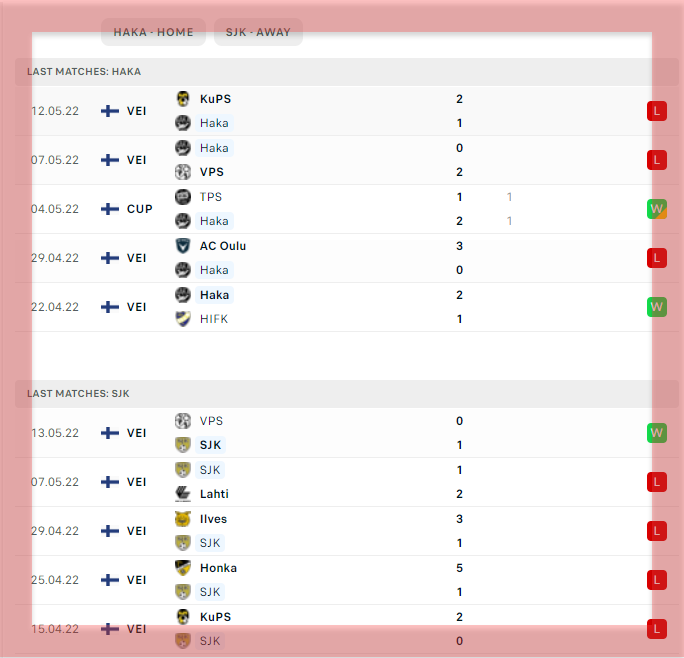