Bragantino vs Estudiantes – Preview, and Prediction

Bragantino vs Estudiantes –  Estudiantes can clinch first place in Group C of the 2022 Copa Libertadores with a single point against Bragantino on Tuesday at Estadio Nabi Abi Chedid. Massa Bruta are in second place in the group, one point ahead of Nacional for a place in the last 16, while the four-time champions are unbeaten with three victories and a tie. Braga’s simple breakdown as they prepare for their final two group games is that if they win, they will advance to the knockout phase.

This Red Bull team has gone undefeated in their two home tournament matches under Mauricio Barbieri, recovering a point in their last match with an equaliser in the 84th minute to draw Velez Sarsfield 1-1. They are one of Brazil’s youngest teams, with an average age of 22.4 entering the domestic season in 2022, and their pace and raw talent have been a handful at this year’s Copa Libertadores. Three of their five goals came in the second half, thanks to their direct style and intense high press.

They lead the Campeonato Brasileiro Serie A in long passes per 90 minutes in 2021, with 43.83, and we’ve seen them play with a lot more build-up from the back this year, while still utilising their speed out wide. Barbieri’s young team received great experience in international games last season, reaching the Copa Sudamericana final, and the fresh acquisitions made during the transfer window have allowed him to play with more balance and structure than in 2021. Estudiantes, a club that was previously accused of anti-football in the 1960s, have proven a difficult team to break down in this campaign, allowing only one goal after four games.

This squad, known as the Professors in the 1930s, is not afraid to sit back and absorb a lot of pressure, having only had less than 40% possession in three of their four group games while still keeping three clean sheets. Estudiantes haven’t won a game away from home since beating Barracas Central 6-1 in the first round of the Argentine Primera Division season in mid-April. Los Pincharratas have not lost a group stage match at this competition after scoring first since 2006, when they were defeated 3-1 by Colombia’s Independiente Santa Fe.

When opposed to their Argentine opponents, Bragantino have a lot more flair and offensive intent; yet, Estudiantes know how to keep their cool and be patient, which should serve them well in this match. 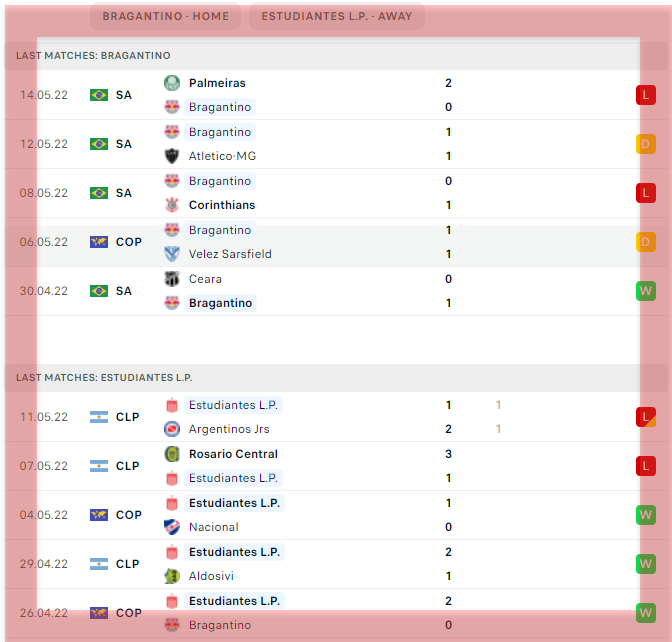