Caracas vs The Strongest – Preview, and Prediction

Caracas vs The Strongest – Caracas has a chance to surpass The Strongest for second place in Group B with two games remaining in the 2022 Copa Libertadores when they visit the Bolivians on Tuesday at Estadio Olimpico de la UCV. The Strongest are coming off a 5-0 win over the reigning Copa Sudamericana champions, Athletico Paranaense, at home in this year’s edition. Caracas have given themselves a chance to do something no Venezuelan team has done since 2009: qualify for the second phase of this tournament after four matches in South America’s best club championship.

Los Rojos del Avila were the last team from the Bolivarian Republic to reach the Round of 16, and with only three points separating first-place Libertad and Athletico Paranaense at the bottom of the rankings, there is no room for error if they wish to return. It would be their greatest point total in a group stage campaign since 2011, when they finished third, a point behind Velez Sarsfield for a place in the last 16. They have been a difficult team to penetrate on home soil under manager Francesco Stifano, a former player who grew up in the Venezuelan capital, with three clean sheets in their previous four matches in all competitions.

The most successful team in Venezuelan football history has had a difficult start to their domestic campaign, now in fifth place, one point behind third-placed Zamora FC. Caracas will enter this match with plenty of confidence, having won six consecutive games in all competitions. Since surrendering two late goals to Junior FC in the second round of qualifying for last season’s Copa Libertadores, they have not lost a match while scoring first.

Christian Diaz and his team’s fate will be in their own hands when the round-robin portion of this showcase event draws to an end, since they are now in second position because they have scored more goals than the other teams. That 5-0 win in their previous match could be crucial in their quest to reach the knockout stage for the first time since 2017, as those five goals are the only thing separating them from third-placed Caracas. They scored more goals in one game than they did in the 2021 tournament, and they looked a lot more determined than they did a year ago, when they finished last in their group, scoring only four goals while conceding 14, Playing them on the road would not be at the top of their list if they could choose a perfect setting for their final two group games.

Caracas vs The Strongest – Betting Analysis

Bolivia has struggled away from home, winning only one of their previous six matches across all competitions and failing to score in three of them. Tigre may be in command of their fate heading into this match, but they might have put themselves in a far better position after conceding an 83rd-minute equaliser at home to Caracas on April 27. Tigre had eight efforts on goal and 69 percent possession, but could only manage a 1-1 draw.

The team from La Paz has done well against Venezuelan opponents in this tournament, winning five of their seven games and losing only one, 2-1 against Trujillanos FC in 2016, Caracas and The Strongest have never faced a position like this before, when they may advance to the next round. Given the stakes, we anticipate a heated match. Although the Bolivians have more experience, Los Rojos del Avila’s home defence has been outstanding, so expect a stalemate when these two teams meet on Tuesday.

Caracas vs The Strongest – Head-to-Head 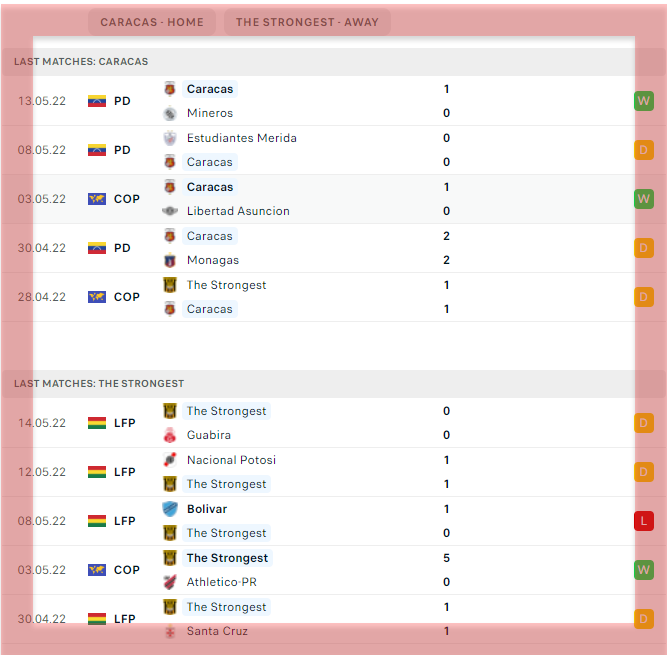