Frankfurt vs Rangers – Preview, and Predictions

Frankfurt vs Rangers – Eintracht Frankfurt and Rangers meet off in Wednesday’s Europa League final in Seville. Giovanni van Bronckhorst’s side beat RB Leipzig in their semi-final to reach the final, while West Ham United was eliminated.

Rangers won 3-1 over Hearts in the Scottish Premiership on Saturday, while Frankfurt drew 2-2 with Mainz in the Bundesliga. No Europa League opponent has beaten Eintracht Frankfurt this season. Oliver Glasner’s side has dominated the 2021-22 competition, beating Real Betis, West Ham, and Barcelona.

Frankfurt ended La Blaugrana’s dreams with a 2-1 semi-final first-leg win over West Ham before completing a historic European run at Deutsche Bank Park. Rafael Borre’s third goal of the campaign completed a 3-1 aggregate win over the Hammers and gave his side a chance to break a 42-year European drought.

Adler defeated Borussia Monchengladbach in the 1980 UEFA Cup final over two legs for their sole continental trophy. Winning the cup and qualifying for the Champions League would make up for finishing 11th in the Bundesliga. Their domestic season ended with a 2-2 draw against Mainz 05. Glasner made early replacements with Seville in mind, and Frankfurt had won 12 Europa League games this season en route to their third European final.

Villarreal won the Europa League last year after Chelsea’s unbeaten run three years earlier, although Benfica and Inter Milan ended as runners-up after going unbeaten. Die Adler have scored in all 12 Europa League matches this season, and Spanish turf has been kind to the German team in recent months – just ask any Barcelona or Betis fan. Frankfurt concluded the Bundesliga season on an eight-game winless streak; their last three wins in all competitions came in the Europa League. Rangers have already beaten German opposition in 2021-22.

While Frankfurt have discovered a steady formula for success in the Europa League, the absence of Hinteregger and doubts over Ndicka’s fitness is not music to the Adler faithful. Rangers can be satisfied with their domestic showings this season, but performances away from Ibrox in the Europa League have been tricky. The extra period of rest may end up working against Van Bronckhorst’s crop.

The Gers have done their fans and everyone involved with the club proud by reaching the final, but Frankfurt, accustomed to winning on Spanish ground, may be a step too far. 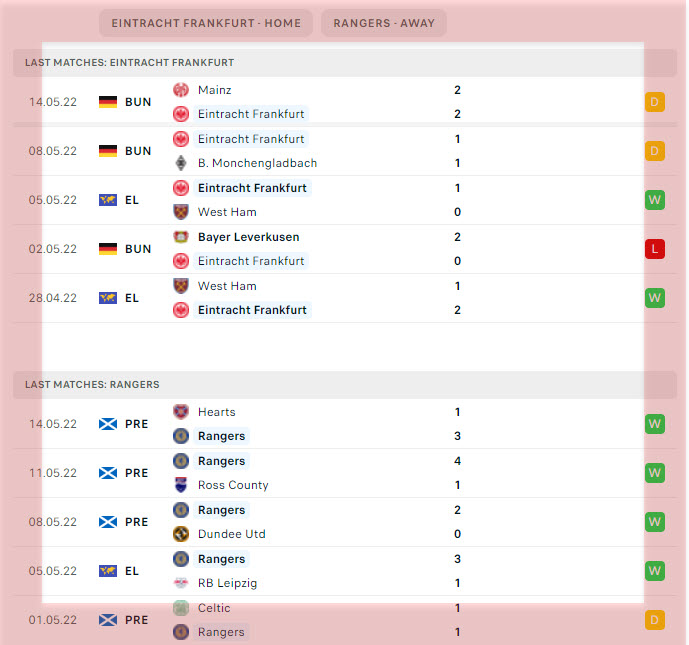