Southampton vs. Liverpool – Preview and Prediction

Southampton vs. Liverpool – Liverpool’s Premier League game on Tuesday at Southampton is the next step in their quest for the quadruple. They already have a domestic cup to show for it.

The hosts have had 10 days to think about their 3-0 loss to Brentford, while the Reds won the FA Cup at the weekend for the first time in 16 years.

Southampton’s and their fans’ disappointing season is coming to an end, but they can take some comfort in the fact that their team has been officially declared safe from relegation before the last couple of gameweeks.

At the Brentford Community Stadium, the Saints’ troubles on the road continued. Pontus Jansson and Yoane Wissa scored in quick succession in the first half, and then Kristoffer Ajer dribbled through a crowd of people and scored in the second half.

Everton and Burnley could still pass the 15th-placed Saints, but Leeds United’s tie with Brighton & Hove Albion means that Ralph Hasenhuttl’s team will finish above the dotted line and can start getting ready for next season in the Premier League.

Before playing Liverpool, they won only one of their last 11 Premier League games, which is not a good sign. This is especially true since the Reds are coming down south with possibly new hopes of doing the impossible.

Liverpool has a good chance of winning the Premier League and the Champions League now that they have won both domestic cups. If they win, they will close the gap to Manchester City to one point, since the champions could only tie with West Ham United, but it is still out of their hands.

Last time out, Liverpool beat Aston Villa 2-1 despite a shaky start on defense. Klopp now has to deal with a lot of injuries as he tries to lead the Reds to their seventh win in a row away from home in the Premier League.

Hasenhuttl famously fell to his knees when Southampton beat Liverpool 1-0 at St. Mary’s last season. However, Liverpool beat the Saints 4-0 at Anfield without a response earlier this season, and they won’t be willing to let lightning strike twice on the South Coast.

Southampton vs. Liverpool – Head To Head 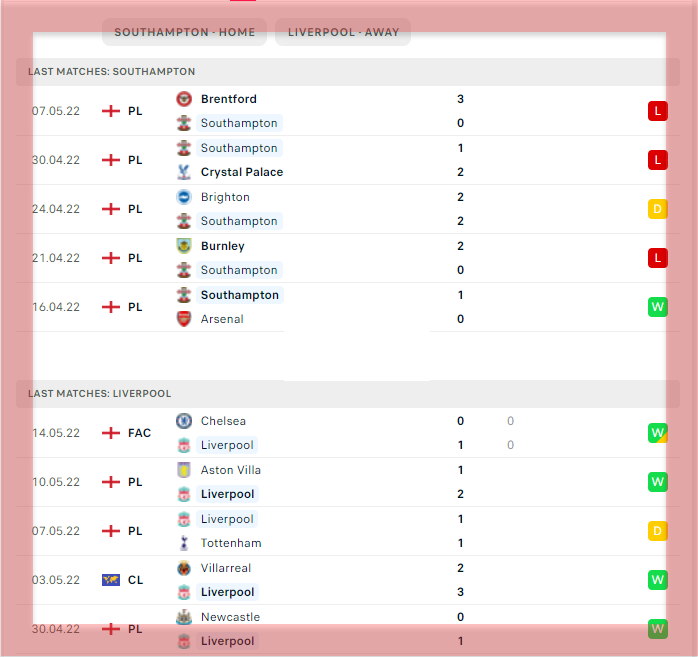