With 75 points from 32 games, PSV is in second place in the standings. In the league, they won 24 games, tied 3 games, and lost 5 games. With only two more games left in the season, they are only 4 points behind Ajax. The home team has a big lead over third-placed Feyenoord and is in the spot to qualify for the UCL.

After a 2-2 draw with Feyenoord in the Eredivisie, PSV Eindhoven has had time to get ready for this game. Roger Schmidt’s team has scored 11 goals in their last six games, which gives them an average of 1.83 goals per game.

Nijmegen, on the other hand, has 38 points and is in ninth place on the table. In the league, they won 10 of the 32 games they played, tied 8 of them, and lost 14 of them. NEC hasn’t scored in 4 of the last 5 games. This shows that things haven’t been going well in front of the goal.

NEC is coming into the game after beating Go Ahead Eagles by a score of 1-0 in their last league game. They haven’t been doing much in the attacking third lately, and getting into the Conference League Playoffs should be their top priority right now.

PSV Eindhoven has won the last eight head-to-head matches in a row. The last time NEC beat this foe was in 2008, which is over 17 head-to-heads ago. In their last two league games, both teams scored. Last December, when the teams played each other, PSV won 2-1.

PSV hasn’t lost to NEC in the league in their last 16 games, which shows how dominant they are. They have also won their last 5 league games at home. There could be a couple of goals here, since their last five league games all ended with two or more goals.

NEC, on the other hand, hasn’t beaten this opponent in 17 head-to-head games. If they want to win this game, they will need to get better at attacking.
The home team is strong enough to win Wednesday’s game, and NEC is likely to lose for the ninth time in a row. 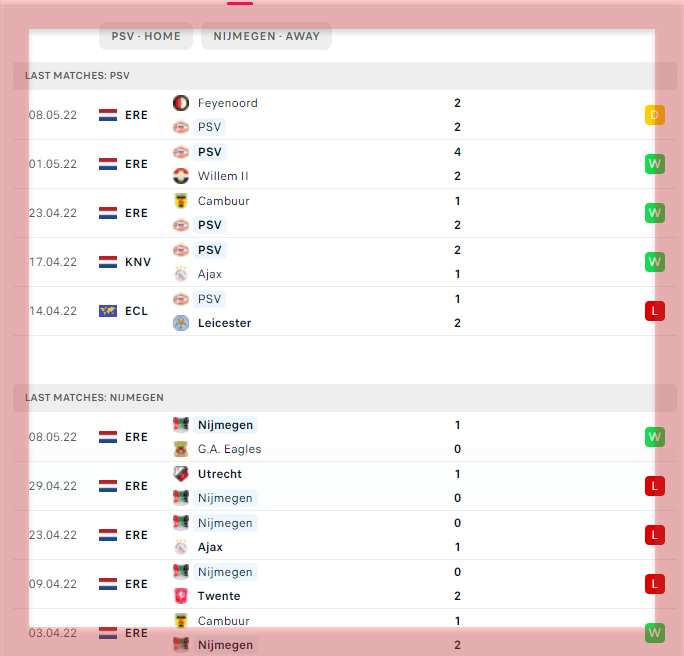