NEC vs Fortuna Sittard – Fortuna Sittard is in danger of getting kicked out of the league, so they will be desperate to win here before they head to Nijmegen. On Sunday, the last game of the season, NEC will play them at Goffertstadion.

With 38 points from 33 games, NEC is in eighth place in the standings. In the league, they won 10 games, tied 8 games, and lost 15 games. The home team needs to win this game to keep their last chance of making the Conference League Playoffs alive. They also have the same number of points as Heerenveen, which is just below them.

NEC will want to do better than they did in their last league game, which they lost to PSV Eindhoven by a score of 3-2. They have let their opponents score in 5 of their last 6 games, giving up 8 goals in the process.

Sittard, on the other hand, has 32 points and is in 16th place on the table. In the league, they won 9 out of the 33 games they played, tied 5 times, and lost 19 times. They have been winning and losing games in an uneven way, which has caused them to fall into the area for teams that are about to be kicked out.

The last game Fortuna played, they lost to Vitesse by a score of 1-2. In their last 6 games, they scored 9 goals and scored each time.

Nijmegen has won the last two head-to-head matches with scores of 3. Fortuna Sittard has only won one of the last 10 games between the two teams. In each of their last five league games, both teams scored.

Also, Fortuna hasn’t beaten NEC Nijmegen in the league in their last seven games. But they’ve only won three of the 16 games they’ve played at home this season, giving them the worst home record.
Both teams are weak because the hosts are poor at home and the visitors are poor on the road. But we think that NEC will win by a narrow margin this Sunday. 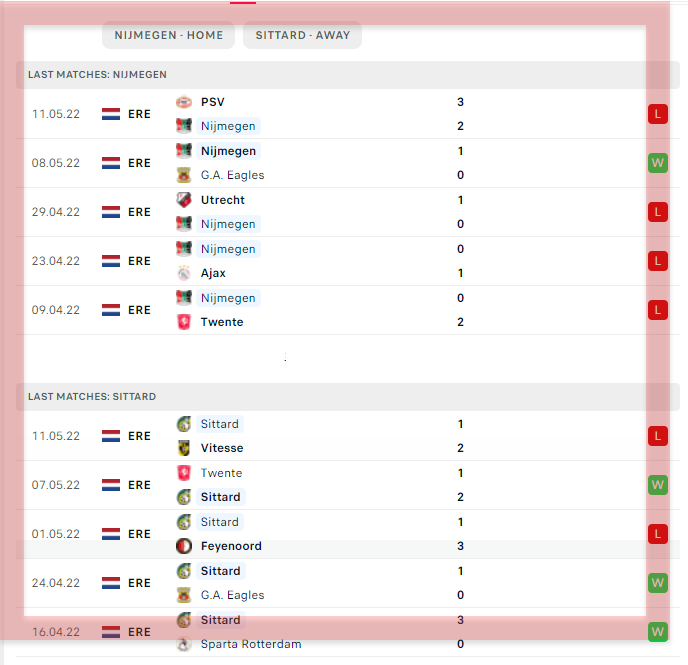