AZ Alkmaar vs RKC Waalwijk – With only one game left to play in the Eredivisie, AZ Alkmaar will face RKC Waalwijk in the hopes of completing the season strong. This Sunday, these two teams will face off at PAFAS Stadion.

With 61 points after 33 games, Alkmaar is in fifth place in the standings. They won 18 games in the league, drew seven times, and lost eight times. Their troubles on the defensive end of the field have also been a crucial reason, as they have conceded 41 goals so far, despite being competent on the offensive end of the field, scoring 63 goals.

AZ is coming off a 2-2 draw in the Eredivisie against FC Utrecht. After Sparta Rotterdam and Ajax, they drew for the third time in a row. They are leading the Conference League Playoffs, although they have conceded goals in each of their past six games.

RKC Waalwijk, on the other hand, is in 13th place on the standings with 35 points. They won 8 of the 33 league matches they played, drew 11 times, and lost 14 times. The visitors’ defense needs to improve, as they have been surrendering goals recently despite winning games.

RKC enters the match after a 2-0 league win against Heracles Almelo in their previous match. In five of their last six matches, they have scored a relatively low amount of goals against opposition opponents.

RKC, on the other hand, won the rematch 1-0. In the last two league games, they haven’t won away from home.
The visitors have likewise had a dismal road record against this opponent in their last 11 meetings. We believe a home win is likely this Sunday due to these constraints. 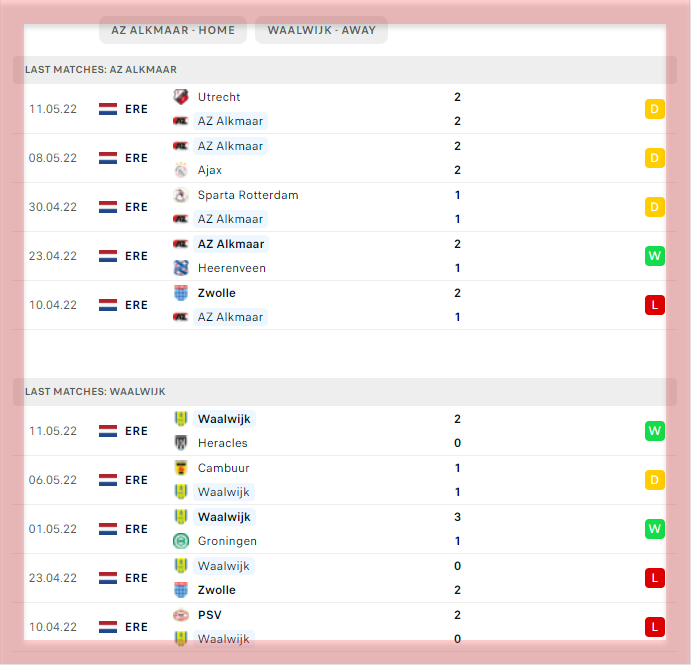