Groningen vs Cambuur – Preview and Prediction

Groningen vs Cambuur – Groningen will host SC Cambuur in their final game of the season. This Sunday, these two sides meet at Euroborg. Groningen is 11th with 36 points from 33 games. They won 9 times, drew 9 times, and lost 15 times. The hosts have been terrible throughout the second half of the season, losing their last 6 games.

FC Groningen will be looking to bounce back after losing 3-0 to FC Twente in the Eredivisie. This was their 6th straight league loss. They have only 4 goals in 6 league games.

Cambuur, on the other hand, is 12th on the standings with 36 points. They won 10 league matches, drew 6 and lost 17. They have nothing to play for in this dead rubber encounter on Sunday night, as they can neither qualify for Europe nor avoid relegation.

SC Cambuur recently drew 1-1 with Willem II in the league. They had previously lost 3-3 to Heerenveen and 1-1 to Waalwijk. Their opponents have scored 10 goals in their last 6 games.  Last 4 league meetings, Groningen won 3 of 4. Cambuur last beat this opponent in 2014-15. In their last three league meetings, both teams scored.

Groningen have lost 6 league games in a row. They haven’t lost a league tie to Cambuur in 4 games. They’ve also dropped 3 straight at home.

Cambuur haven’t won away from home in 8 league games, with 5 defeats. They also have 3 league ties in a row.
Because both teams are inferior, we believe a draw or win for Cambuur is the safest bet.

Groningen vs Cambuur – Head To Head 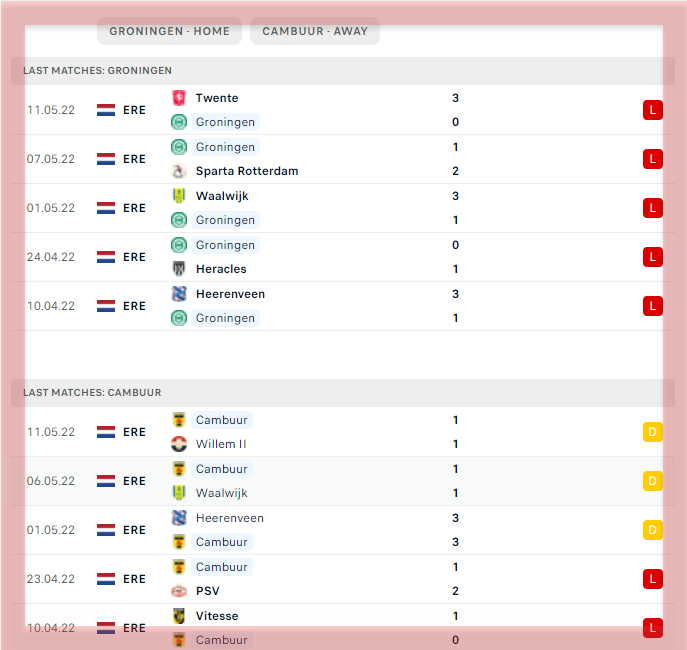