Feyenoord vs Twente – Preview and Prediction

Feyenoord vs Twente – With only one game left, Feyenoord will host FC Twente in an attempt to win the Eredivisie. This Sunday, these two sides meet at De Kuip.

Feyenoord has 71 points from 33 games, third in the standings. They won 22, drew 5, and lost 6 times in the league. The hosts have the only available Europa League position and are 7 points behind PSV.

After a 1-0 league win over Go Ahead Eagles, Feyenoord will be hoping for more. They have gone 5 games without losing, which is a big boost for them. They also have a fantastic offensive side with 75 goals.

Twente, on the other hand, is 4th on the standings with 65 points. In the league, they won 19 games, drew 8 and lost 6. Their main goal is to qualify for the Europa Conference League.

The visitors are coming off a 3-0 Eredivisie win over FC Groningen. Twente is expected to score today, as they have scored in their past 10 games and 9 goals in their last 5.

3 league meetings have ended in draws. Twente triumphed 2-1 after extra time in the KNVB Beker Round of 16. The rematch ended 0-0. In their last five league meetings, both teams scored.

Feyenoord is unbeaten in six games at home. FC Twente hasn’t beaten them in 13 league games.

Twente, on the other hand, has loved playing away recently, going unbeaten in four games. Expect a few goals, since their last 5 games have concluded with 2 or more goals.

We expect a great contest with both teams scoring.

Feyenoord vs Twente – Head To Head 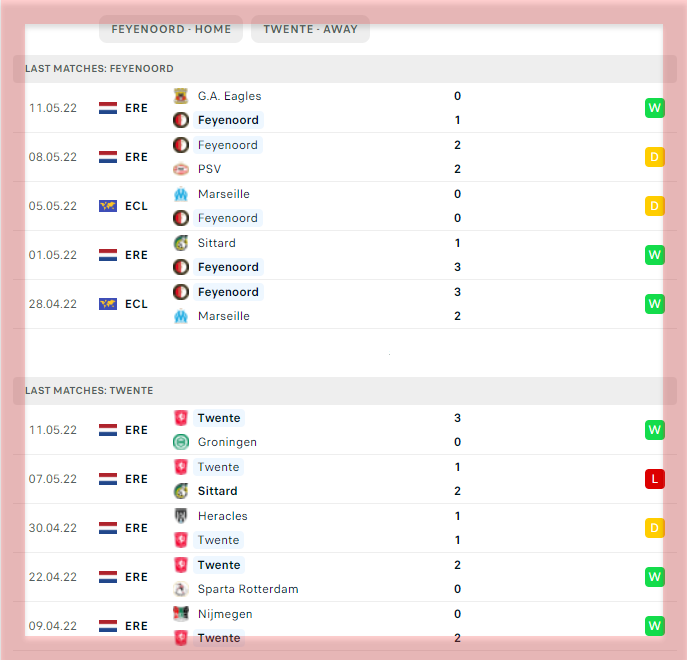