Marseille vs. Strasbourg- Preview, and Prediction

Marseille vs. Strasbourg- Marseille takes on Strasbourg in one of the more intriguing Ligue 1 matches of the season’s final day.

After losing last weekend’s game against Rennes without registering a single shot on target in 90 minutes of play at Roazhon Park, the hosts fell to third position in the league table.

Marseille is now level on points with Monaco in second place and three points ahead of Rennes in fourth place.

They have a goal differential worse than both of these teams. Because only the top two teams qualify for the Champions League group stage, while the third qualifies for the premier continental competition’s third qualifying round, Marseille is in desperate need of a win.

Les Phocians, on the other hand, will find it difficult to defeat Strasbourg. In the previous two rounds, the visitors had kept their nets clean in back-to-back narrow victories over Brest and Clermont.

They’ve also beaten Rennes and held PSG to a tie, so we shouldn’t dismiss their ability, especially given Marseille’s recent struggles (including the UEFA Europa Conference League elimination to Feyenoord in the semifinal of the competition).

Marseille has won 14, drawn 9, and lost just seven of their last 30 matches with Strasbourg, relying on tradition.
Marseille has a remarkable record against Strasbourg at Stade Orange Velodrome, having won 10, drawn 4, and lost only two of the last 16 meetings.

Only one of the previous seven head-to-head meetings between the two teams has resulted in three or more goals.

Strasbourg has played well defensively in recent games, with three or more goals scored in none of their past five Ligue 1 away games.

We prefer the Under 2.5 goals FT option at 2.10 odds since Marseille appeared lifeless seven days ago at Rennes (failing to create a single shot on goal on the occasion). The braver bettors can take a chance on the draw at 3.50 odds. 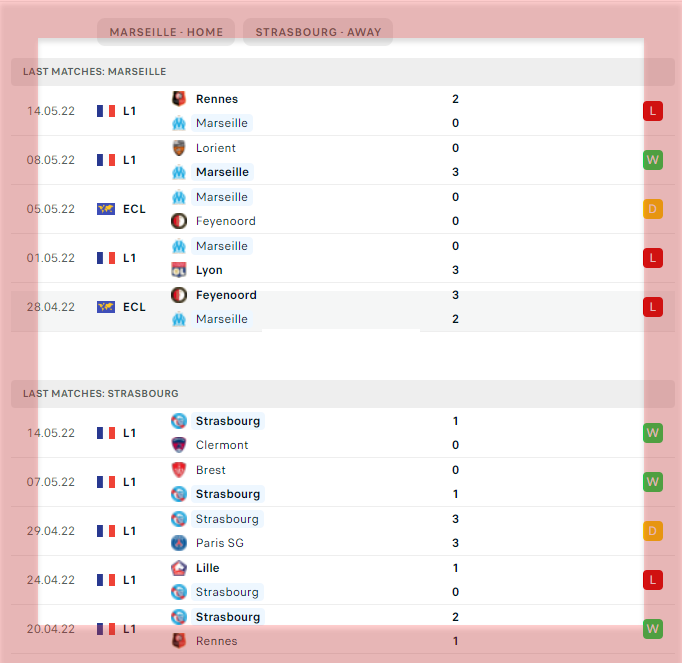