Angers vs Montpellier – Preview, and Prediction

Angers vs Montpellier – When Montpellier HSC hosts Angers at the Stade de la Mosson on Sunday, they will be looking to build on their stunning win against Lyon.

Angers, meanwhile, are hoping for their second win in a row after defeating Reims in a tense affair the previous time out.

Montpellier has certainly bounced back from their opening-day loss to Rennes, as seen by their dominance against Lyon in gameweek three.

Captain Hilton was sent off late in the game, with Memphis Depay converting the subsequent penalty, but a Teji Savanier brace put Lyon to the sword as Montpellier won their second consecutive top-flight match.

Michel Der Zakarian’s side earned that memorable victory and are now in the top five heading into Sunday’s match against Angers, which is precisely where Montpellier wants to be at the end of the season.

Montpellier’s home record speaks for itself — the only team to defeat Der Zakarian’s side at the Stade de la Mosson in the previous 15 league meetings was Paris Saint-Germain – with Montpellier winning six of their past seven Ligue 1 matches on home soil.

La Paillade, on the other hand, will face a team they haven’t beaten in four attempts, with Angers claiming two victories and two draws against Montpellier since 2018.

Angers have won two of their first three matches of the 2020-21 season, despite Stephane Moulin’s side not dominating Reims by any means last Sunday.

After Romain Thomas was also expelled from the game, both sides were reduced to ten players, but Bahoken finally defeated Rajkovic to win the game for the hosts.

While Moulin’s team has two shutouts so far, Angers has only reached the back of the net twice, which will need to change if Les Scoistes are to maintain their momentum heading into the winter months. 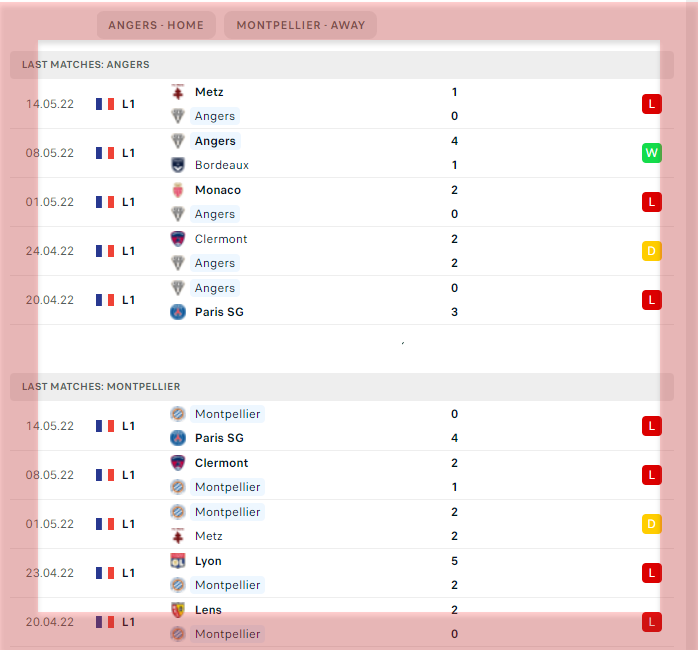