Juventude vs Palmeiras – Preview, and Prediction

Juventude vs Palmeiras – In their most recent match, Juventude earned their first victory of the season. This putting an end to a five-match losing streak. The club has one victory, three draws, and two losses in its last six games. As a result of their performance, they are currently fourth from the bottom of the league table and the first team to be relegated. So far, they have six points from their matches.

Juventude’s most recent encounter was against Avai. Juventude scored two goals in the encounter, while Avai only managed one, resulting in a 1-2 FT score for Juventude.

Palmeiras have so far performed admirably in their encounters. Palmeiras have not lost in a single match in the last five matches, with the exception of the loss in the latest match. With nine points from their matches, the squad is now ranked ninth in the league table.

Palmeiras’ previous encounter was against RB Bragantino. Palmeiras scored two goals, while Bragantino managed to score none. Palmeiras won the match 2-0 on the final whistle.

Juventude’s season has had a difficult start. In the last six games, they have only won once. Palmeiras is also unbeaten in their last five games.

This season, Juventude has yet to win a match at home. The team has two draws and one loss from its three home matches. Palmeiras has only played two road games, both of which ended in draws.

Based on their records, Palmeiras appears to be the superior team and has a better probability of winning than Juventude. In the majority of their recent matches, both teams have scored. As a result, we may anticipate both teams scoring in the matches. 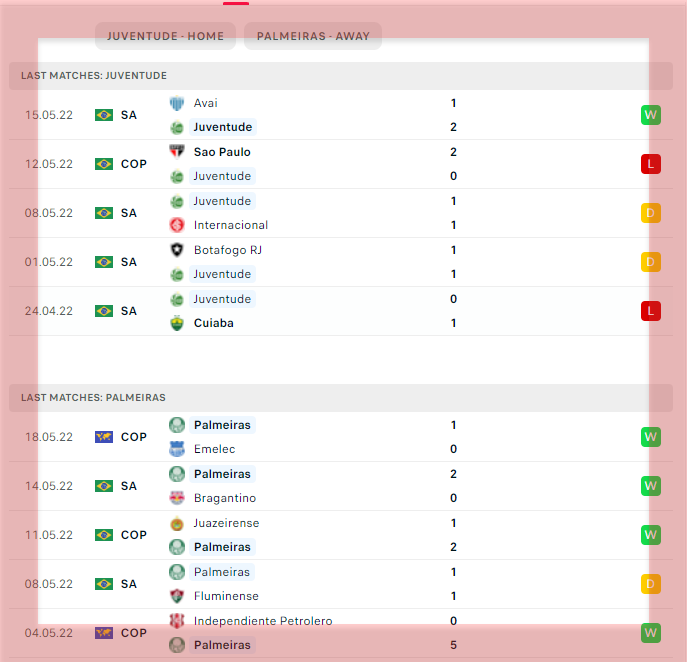