Hartberg vs Ried – Preview, and Prediction

Hartberg vs Ried – The 32nd round of the Bundesliga Relegation Group will begin this week, with Hartberg hosting Ried, with both teams tied on points. This Friday, these two clubs will face off at Stadion Hartberg.

With 21 points from 31 games, Ried is in 9th place in the standings. They only won 8 games in the league, drawing 12 times and losing 11 times. The visitors are only two points clear of the relegation zone, but they are still in third place owing to their superior goal difference.

Ried had drawn 1-1 with LASK in their previous Bundesliga match. Their porous defence has been exposed in each of their last six games, with opponents scoring 11 goals in total.

Hartberg, on the other hand, is only below them in 10th place on the standings with 21 points. They only won seven games in the league, drawing 11 times and losing 13 times. The visitors score goals, but they also surrender goals, implying that defensive modifications are required.

Hartberg will be looking to get back on track after a 2-4 league setback to Tirol in their previous match. In their last six encounters, both teams have scored a total of 23 goals, with the hosts scoring 13 of them.

Ried has won two of their last five head-to-head matches, with the other three ending in a tie. The last time Hartberg defeated this opponent was in 2018. The rematch, which took place last month, finished in a goalless stalemate.

With one game remaining, this is a tricky matchup because both teams are two points ahead of last-placed Altach. Given Altach’s -26 goal differential, a draw would be advantageous to both clubs, as it would ensure their safety.

Taking all of these factors into account, we believe a draw is the most likely outcome. 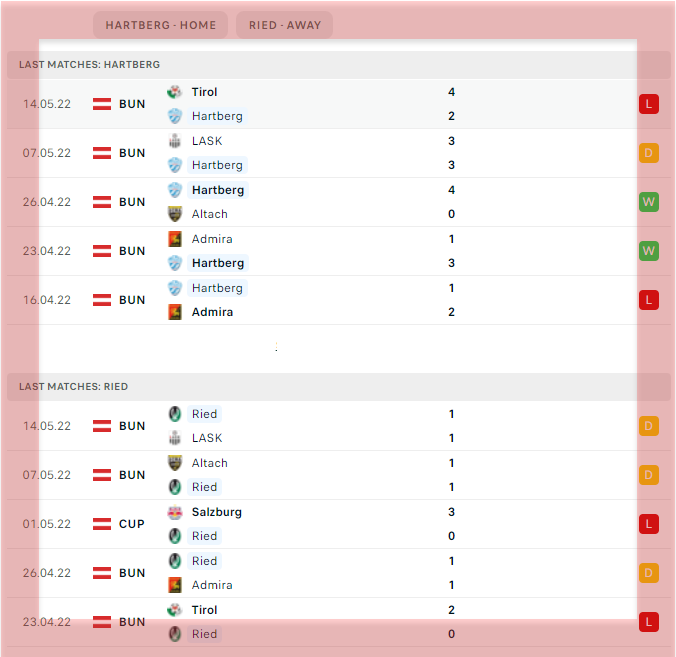