Antalyaspor vs Galatasaray – Preview, and Predictions

Antalyaspor vs Galatasaray –  Galatasaray will play Antalyaspor on Friday evening to conclude their disastrous 2021-22 Super Lig season. The visitors are presently 11th in the table, 30 points behind champions Trabzonspor, while Antalyaspor are seventh, seven points ahead of their opponents.

Antalyaspor finished 16th in the Super Lig previous season, but they are presently seventh in the standings with 58 points from 37 games this season, winning 16, drawing 10, and losing 11 times. Nuri Sahin’s team will come into this encounter on the back of two victories, having defeated Konyaspor 3-2 on May 9 and Kasimpasa 4-2 last weekend, and they have not lost at this level of football since January 20, with their current form exceedingly outstanding.

Antalyaspor has had a solid home record this season, winning 10, drawing five, and losing three of its 18 home matches for a total of 35 points, which is the division’s fifth-best record. The Scorpions, who have been in the Turkish top division since 2015, have not beaten Galatasaray in the league since April 2016, when they were defeated 2-0 in the reverse encounter earlier this season.

Galatasaray, on the other hand, is far from a dominant team, with the Istanbul club now languishing in 11th place in the table, having struggled throughout the season. Galatasaray has won the Super Lig 22 times and finished second 11 times, including last season when they were beaten by Besiktas despite finishing level on points with their opponents.

Gala hasn’t placed lower than sixth in Turkey’s first division since 2011, but they’re presently 11th in the rankings with 51 points after winning 14, drawing nine, and losing 14 of their 37 games. Depending on other results, Domenec Torrent’s side might still finish ninth, but they could also finish 13th, so the visitors will be anxious to complete their season on a strong note. Galatasaray have won three of their previous five league games, including a 3-2 win against Adana Demirspor on Monday after a goalless draw with Istanbul Basaksehir.

Torrent’s club, who have only won four times on the road in the league this season, also competed in the Europa League this season, reaching the last-16 stage of the competition and losing 2-1 on aggregate to Barcelona. Galatasaray will be eager to cap a poor season on a high note, but Antalyaspor are on a long unbeaten run, so we’re hesitant to bet them to lose. As a result, we anticipate a low-scoring stalemate between the two clubs in their final meeting of the season. 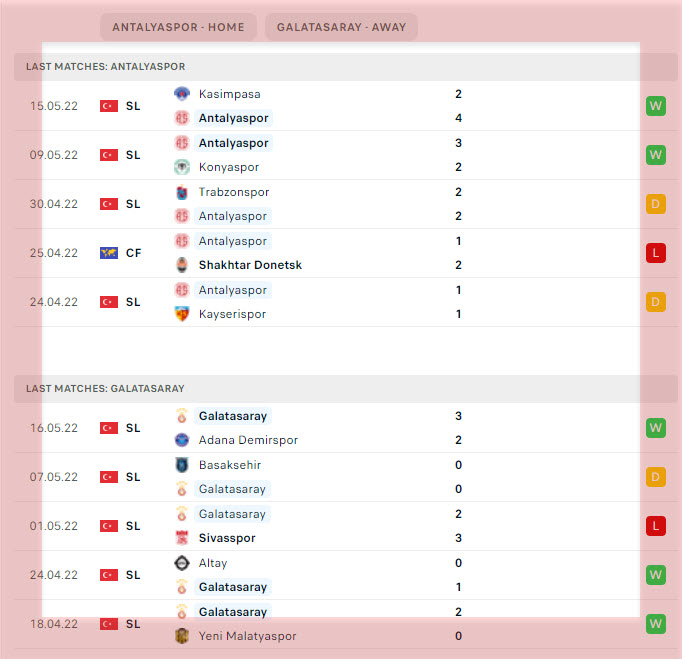