Gaziantep vs Caykur Rizespor – On Friday evening, Gaziantep and Caykur Rizespor will conclude their respective Super Lig campaigns, with both clubs hoping to finish on a high note. The visitors have already been demoted to the second division, while Gaziantep has secured a place in the Super Lig for another season despite only scoring 43 points in 37 games.

Gaziantep finished eighth in the Super Lig previous season, however their 2021-22 campaign has put them in 16th place in the table, with only 43 points from 37 games this season. GFK cannot be demoted to the second division, but they might still finish above Giresunspor in 15th, giving them something to play for in their final game of the season other than pride. Erol Bulut’s team is coming off a 3-0 loss to Alanyaspor last time out, and they haven’t won in the league since beating Galatasaray on March 20.

Gaziantep has the fourth-best home record in the Super Lig this season, with 37 points from 18 games, with only Konyaspor, Trabzonspor, and Fenerbahce having better records. Bulut’s squad, on the other hand, has the poorest away record in Turkey’s first league, with only six points from 19 games, thus their home form has helped them avoid relegation.

Rizespor, on the other hand, will play in the second division next season after being relegated before the season’s final match. There’s no denying that Bulent Korkmaz’s team has had a dismal season, with only 36 points from 37 games and a 17th-place finish. If Altay wins their final game, Rizespor would slide to 18th place, although they have won two of their previous three league games, including a thrashing 7-1 victory against Goztepe earlier this month. The Rize-based club hasn’t played in Turkey’s top division since 2018, but they’ve won the TFF First League three times and will enjoy their chances of making an immediate return next season.

Last season, Rizespor won 5-4 in the equivalent encounter between the two sides, but Gaziantep won 1-0 in the reverse match earlier this season. There isn’t much on the line for either team entering into this match, and there isn’t much to choose between them in terms of talent. We have to trust Gaziantep to complete the season with a win because they have been so good at home this season. 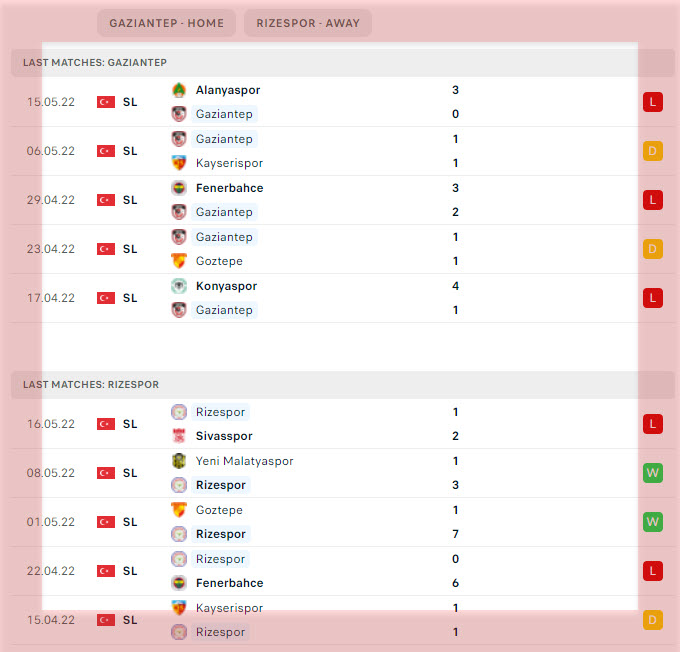