Estonia vs Malta- Preview, and Prediction

Estonia vs Malta- Friday afternoon’s match between Estonia and Malta at the A. Le Coq Arena in Tallinn will decide the Group 2 champion of the UEFA Nations League D. The 1-2 victory by the Estonians in the reverse match in Valletta in June of this year gives them a significant lead.

Henri Anier of Estonia, who entered the game as a substitute, scored the game’s winning goal in the fourth minute of stoppage time. Estonia currently sits atop Group 2 with a perfect record of two victories in two games, and they just need a point from this game to guarantee first place and progress to League C. Malta has accomplished the task thus far in the competition with two clean-sheet victories over San Marino, so we shouldn’t undervalue them.

This summer, Maltese teams Gzira United, Hamrun Spartans, and Hibernians performed admirably in the qualifiers for the premier Europan championships. In the UEFA Europa Conference League, all three teams made it to the third qualifying round, with Hamrun Spartans moving on to the playoffs after defeating opponents including Alashkertt, Velez Mostar, and Levski Sofia.

Since Flora Tallinn member and captain Konstantin Vassiljev remains their brightest star, Estonia’s team does not have a lot of talent. As they prepare to face Malta for the eighth time, Estonia leads the overall series by a solitary victory.

As previously reported, the Estonian team scored the game-winning goal in the 94th minute to give them a 1-2 victory in the rematch on Maltese soil during this season of the UEFA Nations League.

In four of the previous five head-to-head games between these rivals, there were goals at both ends. Based on what we have seen from these two clubs thus far this season, it is very difficult to see the value in betting on the home victory at the 1.80 odds. Due to the importance of this match for both teams, we will therefore pick Malta to win or draw at 1.90 odds. On the other hand, you can barely go wrong betting on Under 2.5 goals FT at 1.57 odds.

Estonia vs Malta – Head To Head 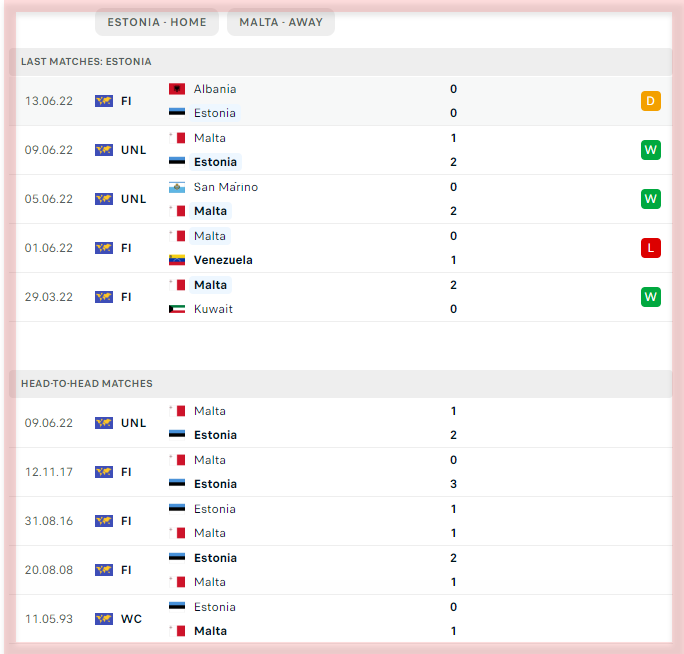