Germany vs Hungary – Preview, and Prediction

Germany vs Hungary – In its victories over Italy and England, respectively, Germany and Hungary each scored nine goals. They will now square off on Friday night at Leipzig’s Red Bull Arena in Gameweek No. 5 of the UEFA Nations League Group 3.

In this difficult group that includes nations like Germany, England, and Italy, the Hungarians have already accomplished wonders. With only two games remaining, they are at the top of the ladder. A victory in Leipzig might perhaps guarantee Hungary the top slot, making it one of the biggest sporting events in the past 10 years.

Italian manager Marco Rossi, who is doing a fantastic job with this bunch of players, is in charge of the Hungarians. In the previous round against England, his team displayed excellent defensive and offensive play, allowing the Three Lions to just two efforts on goal and defeating them on the road with four goals.

The preceding game, which saw Germany defeat European champions Italy by five goals, was also incredibly stunning. On this particular occasion, Time Werner stole the show with a brace. It will be fascinating to watch how the striker performs in front of the home crowd at Red Bull Arena now that he has found fresh life with RB Leipzig.

At their meeting at the EURO 2020 group stage, Germany and Hungary split the points in a 2-2 draw. Three months earlier in Budapest, they drew 1-1 in the opposite game of this UEFA Nations League season.

Only two of their last five head-to-head contests with Hungary were victories for Germany. Roland Sallai, one of Hungary’s greatest players, will be out due to an injury. The 2.05 odds offered for the visitors not to lose by a score difference of two or more look fantastic here because, in our opinion, they are still significantly underpriced.

Given that Hungary has already scored in each of its first four group-stage games, the 2.10 odds on the Both Teams To Score option offer excellent value.

Germany vs Hungary – Head To Head 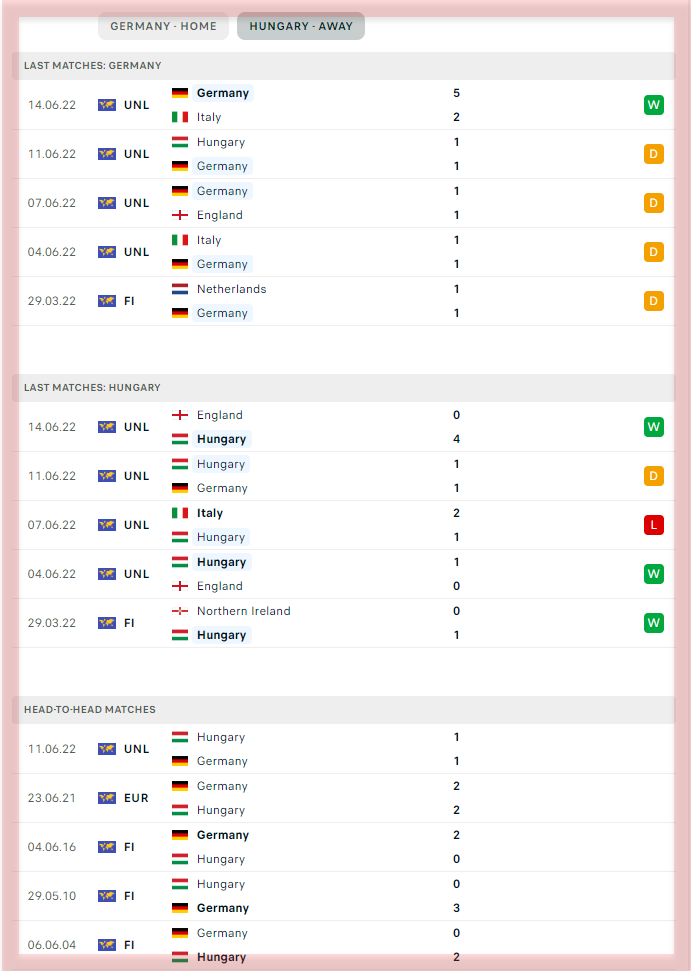