Bosnia and Herzegovina vs Montenegro – Preview, and Prediction

With just two games remaining, the hosts are one point ahead of Montenegro in second place. In comparison to Bosnia and Herzegovina, Finland and Romania are four and five points behind, respectively. With two wins and two draws so far, the Bosnians are the only team in this group without a loss. Both victories have taken place at Stadion Bilino Polje in Zenica, including the 3-2 victory over Finland in the previous round three months ago.

For that triumph, Edin Dzeko and Miralem Pjanic were primarily responsible. The former scored two goals, and the latter chipped in with a goal and an assist. Forward Stefan Mugosa of Montenegro will need to be closely watched by the Bosnians in this situation. In the previous round’s 0-3 road thrashing of Romania, Mugosa delivered his greatest performance for the national team by completing a hat-trick.

Despite having a shared border, Bosnia and Herzegovina and Montenegro have only ever faced off against one another three times in history. It’s interesting that all three games finished in draws, including the 1-1 tie from the UEFA Nations League three months ago.

The only goals scored in the head-to-head matches between these two sides were the two from their previous meeting. In this Nations League group, Bosnia and Herzegovina enjoy a flawless record in front of the home crowd, but the 1.66 odds that are being offered for their victory here are not at all enticing to us.

After all, Montenegro, who will also enter this match in the best of moods following the 0-3 thrashing of Romania last time out, has never defeated them. Instead, we will place our primary wager at the odds of 2.10 on goals in both halves. With Stefan Mugosa to score anytime for the visitors at the 4.33 odds, there is also a ton of value.

Bosnia and Herzegovina vs Montenegro – Head To Head 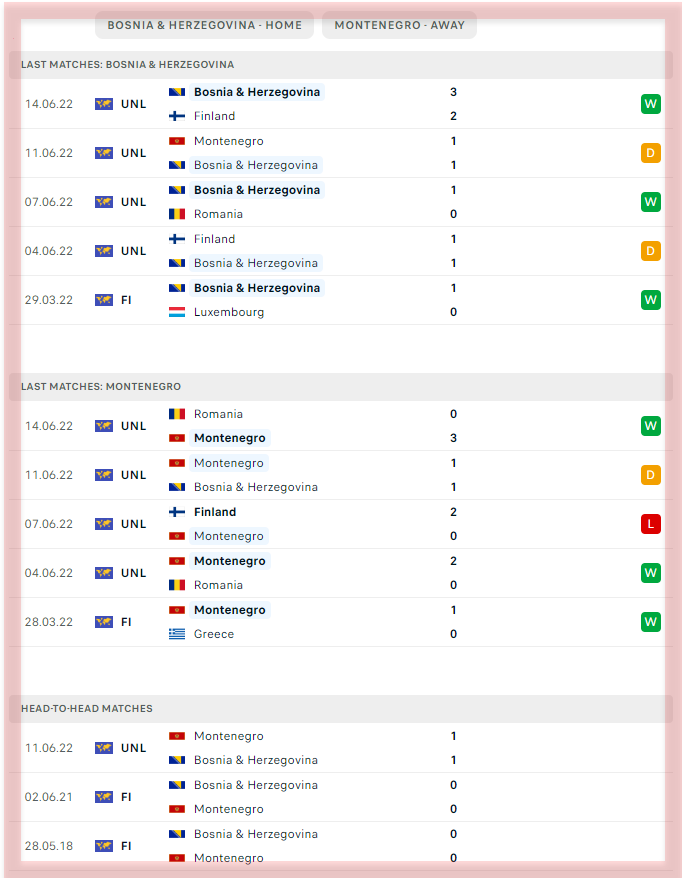