Italy vs England – Preview, and Prediction

Italy vs England – Three months ago, Italy and England both received humiliating losses at the hands of Germany and Hungary, respectively.

However, the Azzurri are in a far better position heading into this Matchday No. 5 matchup as they are only two points behind Group C leaders Hungary. England has only accrued two points in four games and is the only side in the section without a victory thus far in the campaign.

The Three Lions will be extremely driven to avoid finishing last in their group and being demoted to League B in the upcoming tournament. Harry Kane, Raheem Sterling, Phil Foden, Jude Bellingham, Ivan Toney, and more top players have been called up by Gareth Southgate for this team.

For their respective clubs, all of the aforementioned players have been having a fantastic run of form (namely in the Premier League). Ivan Toney received his first national team cap as a result of his outstanding performances at Brentford, while Kane and Foden both scored last weekend as their teams triumphed.

On the other hand, Italy will be without a number of well-known players, such as Leonardo Spinazzola, Federico Chiesa, Stefano Sensi, Lorenzo Insigne, Nicolo Zaniolo, and Andreas Belotti. The two teams squared off in the EURO 2020 championship game in London, with Italy emerging victorious after a 1-1 deadlock in regulation time at Wembley.

The two clubs split the spoils in a scoreless draw in their previous head-to-head matchup, which was played in this Nations League group in June. It’s interesting to note that all four of their most recent face-offs have been in draws.

We are strongly tempted to take the 2.62 odds for the away victory wager after examining the team lineups and realizing that England must win to risk being demoted to League B the next season.

This season, Harry Kane has been outstanding for Spurs. He scored and assisted in the rout of Leicester on Saturday. At 2.75 odds, you can wager on England’s go-to scorer to score whenever.

Italy vs England – Head To Head 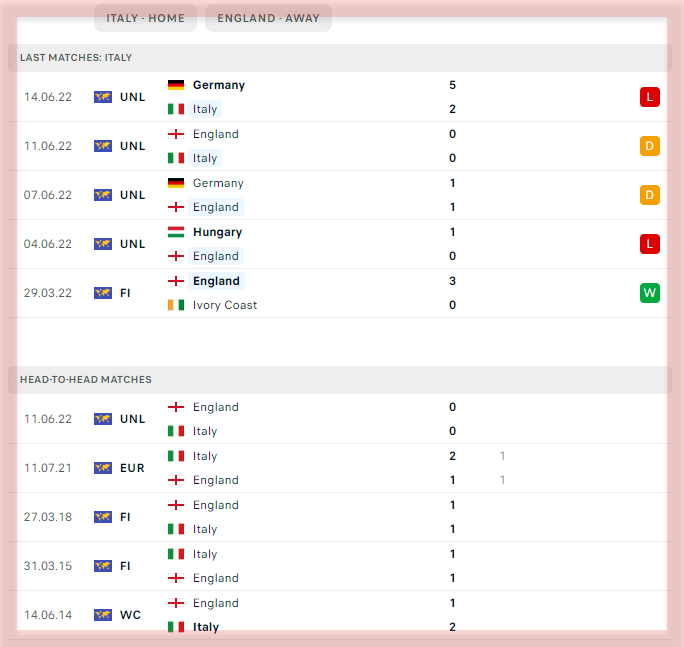