Elche vs Atletico – Preview, and Prediction

Elche vs Atletico – After beating city rivals Real Madrid, Atletico Madrid will go to Elche on Wednesday looking to clinch a top-four finish in La Liga.

Los Colchoneros moved six points clear of fifth place with a 1-0 home win over the weekend, ensuring their safety.

With 32 points from 31 league games, Elche seemed destined to be involved in a heated relegation struggle in the final knockings of the season, but they were able to put two key results together in April.

Tete Morente scored the winning goal in the 82nd minute, lifting his team out of the relegation zone and onto 39 points from 33 games.

Then came a 1-1 tie with Osasuna in which Pere Milla scored in the 84th minute, then a 3-0 loss to Cadiz at the weekend.

However, with a seven-point lead over Mallorca with three games left, Francisco’s players know that a win will be enough to keep them in the top flight.

They welcome an Atletico Madrid team eager to put a second straight win on the board with the possibility to cement a top-four finish, depending on other outcomes.

After a slow start to their championship defence, last season’s La Liga champions went on a six-match winning streak from February to April.

After that run, Los Colchoneros battled for consistency, losing to strugglers Mallorca, then prevailing over Espanyol, drawing with Granada, and losing 2-0 to Athletic Bilbao.

With their lead over fifth place down to three points, Diego Simeone’s men needed a win in the Madrid derby on Sunday, and they got it due to Yannick Carrasco’s goal five minutes before halftime.

The capital club know they can secure a top-four finish if they win all three points on Wednesday and Real Betis fail to win any of their last three games.

Elche vs Atletico – Head To Head 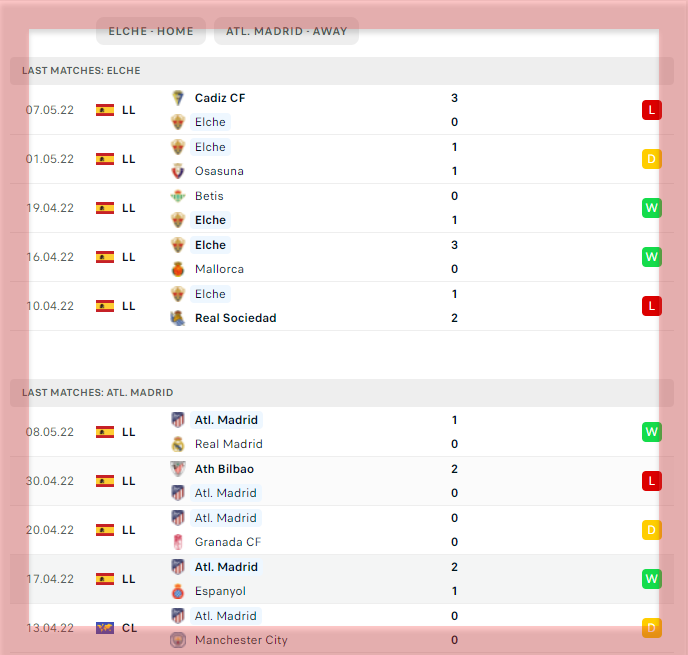