Augsburg vs Greuther Furth – On Saturday afternoon, Greuther Furth will bid farewell to German football’s first division when they travel to WWK Arena to face Augsburg in the 34th round of the season . The top division proved too powerful for Greuther Furth, which lacked the financial resources to compete at this level. Furth was the first team to be demoted a while ago, and they now have a twelve-point disadvantage to Stuttgart, who now hold the relegation playoffs spot.

Greuther Furth will have a chance to win their final game in the Bundesliga, as they face Augsburg, who are currently out of form. Augsburg also secured top-tier survival a while ago, but their form has deteriorated significantly since then.

Markus Weinzierl’s team had previously lost four of their previous five Bundesliga games. They are coming off a brutal 4-0 setback at the hands of RB Leipzig last weekend. Augsburg has now conceded four goals in each of their previous two Bundesliga games. They are now poised to face the weakest defensive line in the Bundesliga this season, which means we should expect a goal fest at WWK Arena on Saturday afternoon.

Both clubs are lacking in defensive precision these days, and we doubt either will be able to keep things quiet at the back here. The lack of passion for either team makes the Over 2.5 goals FT & Both Teams To Score bet, which has odds of 1.72, an even better bet. In terms of the outcome, we believe there is value in picking the visitors to win on their final day in the Bundesliga at 5.25 odds. After all, Augsburg had previously lost four of their previous five league games. 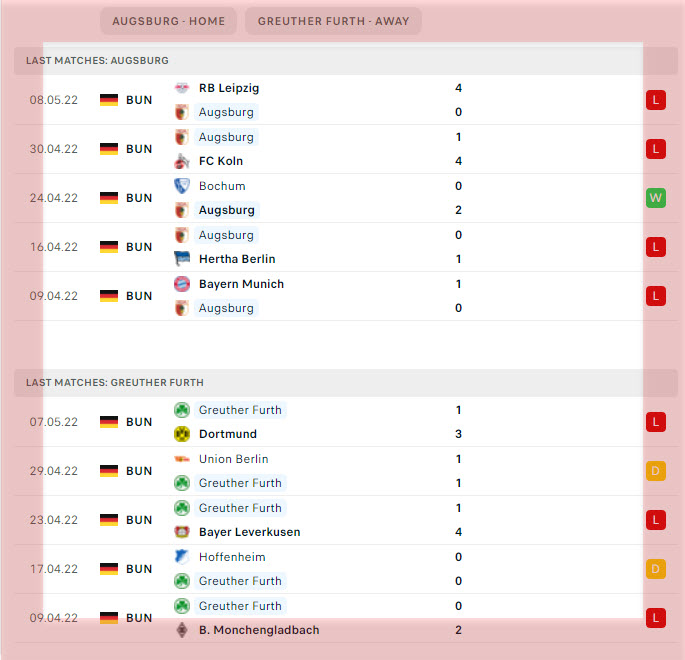