Rennes vs Marseille – Preview, and Predictions

Rennes vs Marseille –  The match preview for the Ligue 1 match between RENNES and MARSEILLE analyzes both sides and contains the teams’ most recent matches, match facts, head to head (h2h), goal statistics, table standings, match strengths, and at least a computer derived match prediction. All of these factors should be taken into account before placing a wager on this match. You can explore the teams in their current form by clicking on the team names.

When Rennes and Olympique Marseille meet in the Ligue 1 derby on Sunday evening, all eyes will be on Roazhon Park. Les Rouges et Noirs are battling for a top-three finish, while OM hopes to qualify for the Champions League. In terms of the home team, Nayef Aguerd has returned from suspension, while all of Alfred Gomis, Loic Bade, Kamal-Deen Sulemana, and Jeremy Gelin have been dealing with ailments recently.

Marseille, on the other hand, defeated Lorient 3-0 to keep their hold on second position in the table. Given OM’s attacking ability, we believe both teams to score is a viable betting choice. Dmitri Payet, who was injured in the Conference League match against Feyenoord, is still in the hospital with Milik, de la Fuente, and Balerdi. Olympique Marseille defeated Rennes 2-0 in the first half of the season.

are in fifth place, one point behind Nice in fourth and last Champions League berth, with two games remaining, while Marseille are second and need a point to guarantee their own qualification. The hosts will be trying to avenge a 2-1 loss to Nantes last time out, which stopped a two-game winning streak. The visitors defeated Lorient 3-0 to make it three wins in a row in the league.

Rennes have won nine of their past ten games at home in all competitions, including a triumph over Leicester. Marseille has won four of their previous five league games on the road, with their only loss coming at PSG. Rennes matchups are known for seeing both teams score, with seven of the last nine having done so. Marseille also knows how to score goals, having scored in each of their last 21 games in all competitions. Rennes’ primary threat is Martin Terrier, who has scored an incredible 21 goals this season. Dimitri Payet, a former Premier League player, leads Marseille with 12 goals and ten assists. 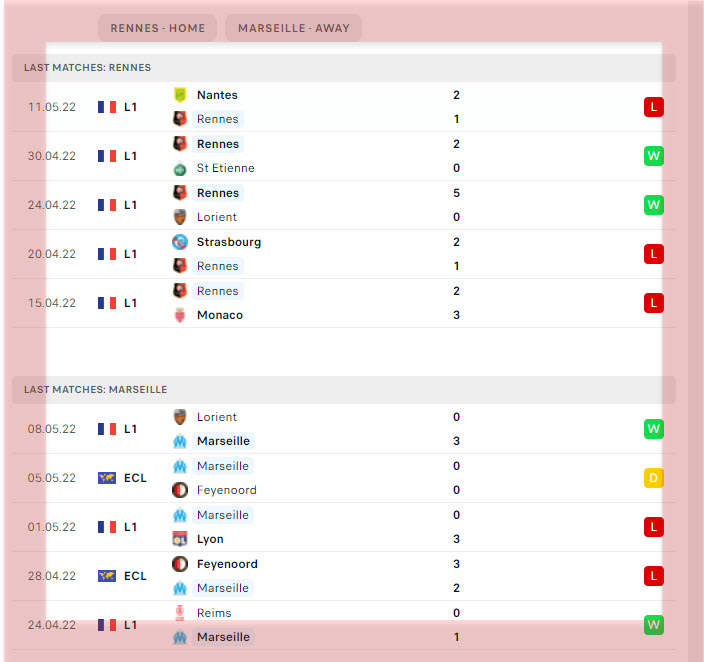