Lyon vs Nantes – Preview, and Predictions

Lyon vs Nantes – Lyon enters the penultimate game of a dismal league season after losing 3-2 to Metz last time out, thereby ending their European hopes. For the first time since 1995/96, the team that started the round in ninth hopes to avoid ending outside of Ligue 1’s top seven slots. That isn’t to say Lyon’s last seven league meetings haven’t been entertaining, with both teams finding the net in all but one of them.

Indeed, the Groupama Stadium supporters will welcome ‘Les Gones’ for the final time this season after witnessing their team win three consecutive home Ligue 1 games, with Lyon scoring in every half during that run. Their torrid scoring streak is also a good match for a visit from Nantes, as Lyon has only lost one of their past 19 home league H2Hs (W15, D3).

Nantes, on the other hand, will be confident after winning 2-1 at home to Rennes in midweek to follow up their Coupe de France victory. While we may now see desire for the remainder of the season begin to diminish with only pride to play for, Nantes’ come-from-behind victory at Rennes does suggest the visitors are ready to finish well.

The ‘Canaries’ will undoubtedly be relieved that this is their final road trip of the season, since they have won half as many points away from home as they have at home (36 at home vs 18 away). Nantes would overtake Lyon into eighth position with a win tonight, putting them on course for only their second top-eight finish in Ligue 1 since 2003/04.

Moussa Dembélé of Lyon has thrived since being promoted to captain recently, netting nine goals in his past seven league outings. Meanwhile, Ludovic Blas of Nantes has scored the first goal in five of his previous six appearances, including the cup final last weekend. Only Rennes (15) have scored more goals between minutes 46 and 60 this season than Nantes (11). 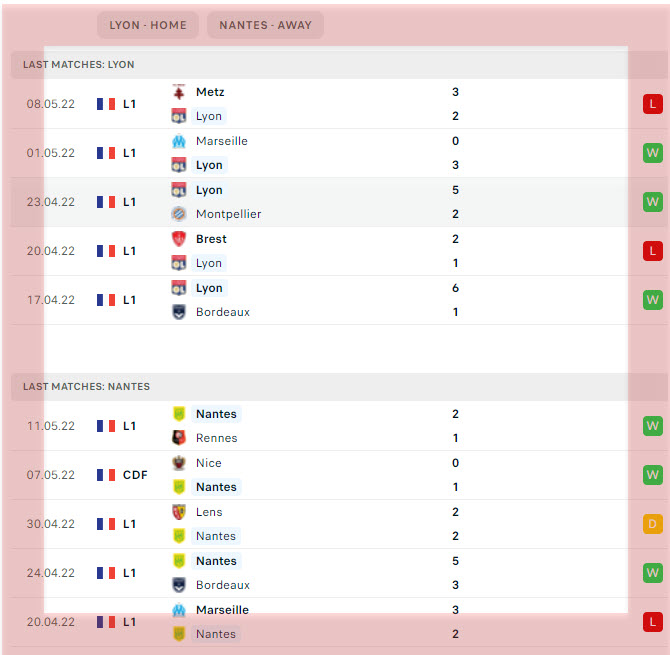