Bordeaux vs Lorient – Preview, and Predictions

Bordeaux vs Lorient – Bordeaux’s destiny is all but sealed, as they are currently bottom of Ligue 1 and seven points from guaranteed relegation with only two games remaining, while Saturday’s visitors at the Stade Matmut-Altantique are attempting to avoid falling into the relegation playoff place.

Lorient are now in 17th place, three points ahead of Saint-Etienne, and a favorable result this weekend might ensure Lorient’s top-flight spot for the following season. Bordeaux has had a forgettable season, and their recent record ensures that they will at the very least participate in a relegation playoff match, if not immediately relegated to the second division.

Last time out, David Guion’s side went to Angers and lost 4-1 at the Stade Raymond-Kopa, as Bordeaux failed to restrict the home team’s attacking chances. Bordeaux supporters have seen their team concede 89 goals in 36 matches this season, so that defensive performance comes as no surprise.

The hosts are anticipated to be more solid at the back this weekend, having conceded 23 fewer goals at home, but Bordeaux will still be vulnerable to Lorient’s attacks, having only won three times at home this season. With 18th-placed Saint-Etienne playing a team 12 points better off than them this Saturday, facing a squad that has already been relegated may give a decent opportunity for Lorient to ensure their survival in Ligue 1 before the final day next weekend.

The team of Christophe Pelissier is coming off three straight losses, the most recent of which was a 3-0 loss to second-placed Marseille on Sunday. Lorient’s recent two victories have both come against teams now behind them in the table, indicating that they are gaining the points they need to stay afloat from their nearest competitors.

Three points may potentially put Lorient in 16th place, which, if they can keep it until the end of the season next week, would be the same as last year’s finish. In the rematch between these two sides in October, Julien Laporte’s 76th-minute shot equalized Alberth Elis’ earlier opening goal for Bordeaux, resulting in a 1-1 tie.

Both teams are in bad form heading into this match, but with Lorient having greater motivation because Bordeaux has already been relegated, the visitors are expected to win. Despite both teams’ poor defensive records, this could be a low-scoring affair, since neither team has reached the back of the net in recent weeks. 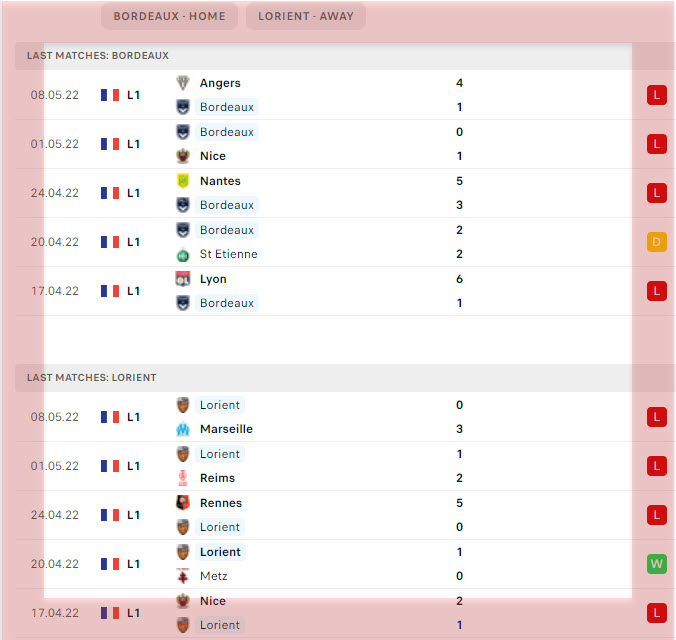