Nice vs Lille – Preview, and Predictions

Nice vs Lille – The fight to enter Europe’s elite next season is down to the wire with only two games remaining in the Ligue 1 season, with Nice still in contention after their come-from-behind 4-2 victory over St-Étienne last time out. The fourth-placed club has now won three league games in a row, albeit failing to lead at halftime in each of those three meetings illustrates how sluggish beginnings have been an issue they’ve overcome well.

The Allianz Riviera crowd will be in full voice after watching their team go undefeated in their past six home league games (W5, D1), however winning four of these games by a single goal shows it hasn’t always been easy. However, a visit from Lille could increase the home side’s confidence even more, since Nice has gone over a decade without dropping a league home match (W4, D5).

Lille’s back-to-back defeats complete a run of only one win in their past seven league games (D2, L4), leaving the defending champions fighting for a top-half finish. Lille’s Achilles’ heel has been conceding the opening goal in all four of those losses, despite the fact that they’ve been relentless when scoring first this season, losing only once in 19 league games in which they’ve scored first (W11, D7).

After suffering consecutive away league defeats for the first time since October last year, ‘Les Dogues’ may be relieved that this is their final road trip of the season. Lille’s recent road games have been devoid of back-and-forth clashes, with only two of their past seven games seeing both sides scoring, emphasizing the significance of gaining the upper hand initially.

Players to watch: Nice’s Andy Delort has scored seven of his last eight goals at home, while Lille’s Jonathan David has scored the first goal in six of his past nine league games after being goalless since early March ,Lille has won 11 of their last 12 league games with the identical half-time/full-time outcome. 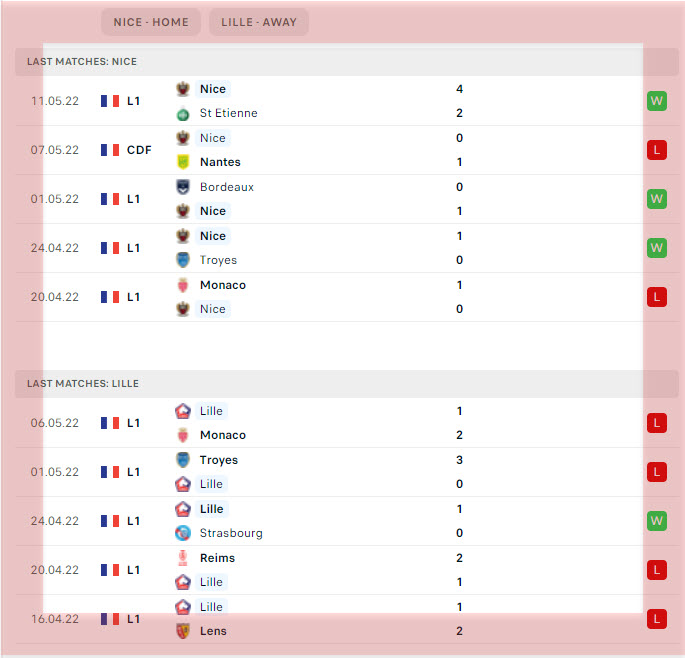