Montpellier vs PSG – Preview, and Predictions

Montpellier vs PSG – Montpellier’s survival is already assured, but their league form in 2022 has been comparable to that of a relegation-threatened team (W3, D3, L11). Only one of the three wins came at home during that span, so a return to the Stade de la Mosson – where Montpellier has lost the last three home H2Hs – may not bring the much-desired comforts ,After losing 2-1 to Clermont last time out, Montpellier’s coach Olivier Dall’Oglio lamented that “confidence is no longer there.” In their last six home matches, ‘La Paillade’ have failed to score the first goal.

While Paris Saint-Germain have long been crowned champions, all is not well in their camp, as coach Mauricio Pochettino’s future remains unknown. This is reflected on the pitch, as PSG has drawn three consecutive Ligue 1 games, the latest two of which saw them lead by two goals at the halftime break, indicating some unwelcome complacency.

PSG would be well to start strong if they are to prevent their first run of four consecutive top-flight draws since January 2005. This is because the Parisians have yet to win a Ligue 1 away game this season in which they have failed to score before halftime (D4, L4).

Players to keep an eye on: Montpellier has won all seven Ligue 1 matches in which the talismanic Stephy Mavididi has scored this season. PSG’s Kylian Mbappé will attempt to outscore him in this match, having contributed to 15 goals (G10, A5) in ten personal H2Hs. PSG has a perfect (W7) record when they score first on the road in Ligue 1. 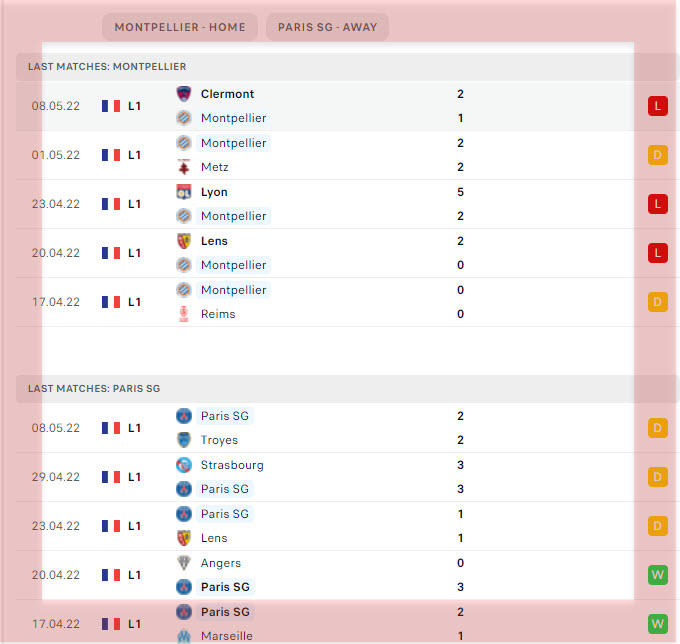 Our Prediction: Both Teams To Win