AS Roma vs Verona – preview and prediction – team news, and lineups

AS Roma vs Verona – Roma welcomes in-form Hellas Verona to Stadio Olimpico on Saturday evening, hoping to keep their narrow chances of finishing in the top four alive.

The hosts have slid out of the European positions after consecutive Serie A draws – plus Coppa Italia elimination – while the visitors have won four of their last six games and are only four points below their capital counterparts in the table.

Even though Jose Mourinho has led his team to a four-match unbeaten streak for the first time in over a year, a rising number of Roma supporters are dissatisfied.

The Giallorossi had been held scoreless by Serie A strugglers Genoa, and then beaten 2-0 by Inter in the Coppa Italia quarter-finals, so they went to Sassuolo last weekend in need of a morale-boosting success.

They were grateful to return to the capital with even a point after falling behind 2-1 in the 94th minute, thanks to the unlikely source of Bryan Cristante rescuing the day with a late-headed goal against 10-man opposition.

Antonin Barak scored the game’s first goal as Hellas clinched a rare victory over their Roman rivals, and the Czech playmaker has been involved in the club’s recent run, which has helped them maintain their position in the top half of the Serie A standings.

Barak scored the second goal in a 4-0 victory over Udinese at Stadio Bentegodi on Sunday, following his double in a 4-2 win at Sassuolo last month.

The Gialloblu are the only team in the top five European leagues to have three players with at least nine league goals this season, with Barak (nine) joining top scorer Giovanni Simeone (12) and Gianluca Caprari (eight) (also nine).

AS Roma vs Verona – Team News:

Jose Mourinho surprised everyone by starting rookie striker Felix Afena-Gyan last Sunday, and it will be interesting to see if he keeps trust with the young Ghanaian this weekend.

Nicolo Zaniolo, who missed the match against Sassuolo due to suspension, is more likely to return in attack, while Stephan El Shaarawy is another option if passed fit in time. Tammy Abraham, the hosts’ leading scorer, leads the line once again.

Due to Gianluca Mancini’s ban for accumulating bookings, Roma will be forced to make a defensive change, with former Verona defender Marash Kumbulla possibly replacing him.

Hellas captain Davide Faraoni is expected to start against the Olimpico after coming off the bench last week, leaving Fabio Depaoli out despite scoring in the win over Udinese.

Gianluca Caprari, who made four league appearances for Roma between 2011 and 2013, has scored in each of his previous three league games and should start alongside Antonin Barak in Igor Tudor’s preferred 3-4-2-1 formation in support of top scorer Giovanni Simeone.

Due to the absence of experienced midfielder Miguel Veloso, Adrien Tameze and Ivan Ilic could once again lead the visitors’ engine room.

AS Roma vs Verona – Head-to-Head: 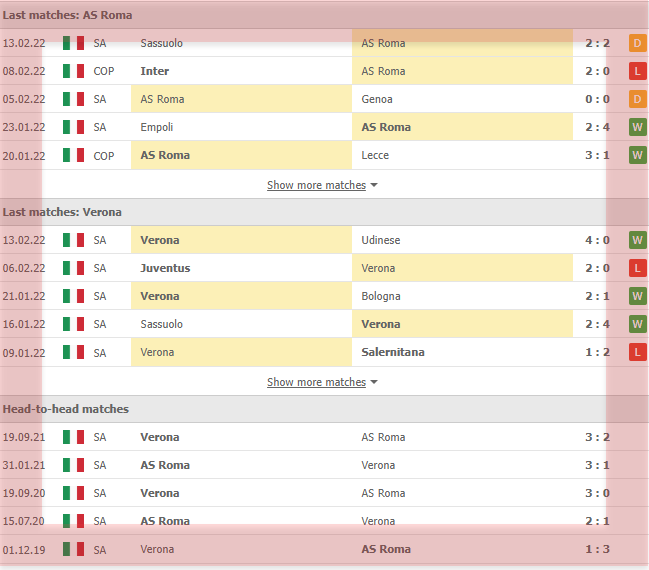