Real Madrid vs Alaves – Real Madrid will be looking to get back on track when they host relegation-threatened Alaves on Saturday evening.

Real Madrid were so impressive in the early days of 2022, winning five consecutive games in all competitions, but the capital giants have only won one of their last five, an unimpressive 1-0 home victory against Granada in La Liga on February 6.

Los Blancos have shared points with Elche and Villarreal in two of their past three league games, allowing second-placed Sevilla to reduce the gap. With only four points separating the top two teams, there is a lot of pressure on the home side to win this match.

As previously said, Alaves are currently 18th in the table, four points below 17th-placed Granada, and face a tough battle to keep their status at this level for another season.

They have 20 points after five wins, five draws, and 14 losses, but they are the league’s lowest scorers this season, with only 19 goals, which is a problem as they fight to avoid relegation.

Jose Luis Mendilibar’s team, on the other hand, will come into this encounter on the back of a win, having defeated Valencia 2-1 last time out, with Joselu’s late penalty winning all three points in front of their home fans.

Real Madrid have no injury or suspension issues heading into this weekend’s match, except for Mariano Diaz (pelvis), although head coach Carlo Ancelotti is anticipated to make a handful of changes to the lineup that began against PSG.

Indeed, Federico Valverde might replace Luka Modric in the middle of the park, while Rodrygo is expected to take over on the right side of the front three from Marco Asensio.

Karim Benzema did not aggravate his hamstring during Tuesday’s setback in Paris, so the Frenchman should continue to lead the line, while there are unlikely to be any changes at the back, with Ferland Mendy coming through the match with no problems despite his previous hamstring trouble.

Alaves, on the other hand, will be without Ximo Navarro due to a knee injury, but the visitors are generally in good shape heading into this match.

Mendilibar’s selection of the same XI that took to the field for the first whistle against Valencia would not be surprising given the fact that they haven’t played since Sunday.

Although Edgar Mendez and Pere Pons may be the two players pressing the hardest to break into the team, Joselu should continue to lead the line, with Luis Rioja and Jason likely to keep their wide-area roles. 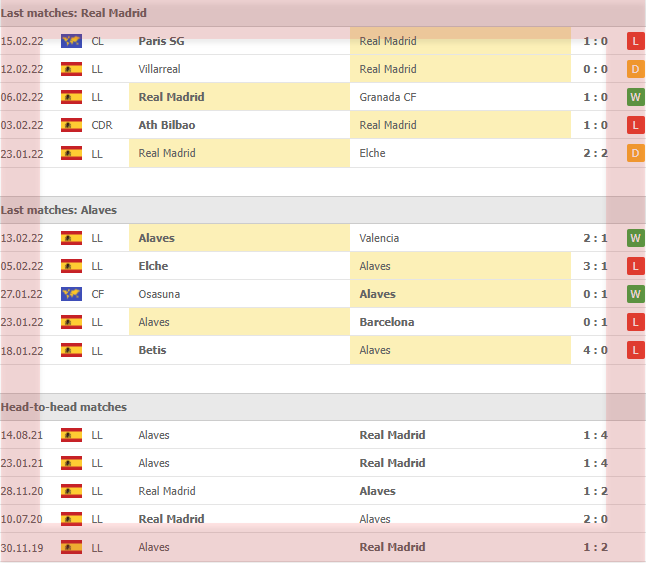