Cadiz vs Getafe – preview and prediction – team news, and lineups

Cadiz vs Getafe – Cadiz will visit Getafe on Saturday, with the two teams separated by six points at the bottom of the La Liga standings.

The hosts are currently in 19th place, five points from safety, while their visitors have a five-point cushion between them and the drop zone following their recent ascent.

Cadiz have set their eyes on retaining their top-flight position after a successful debut season back in La Liga last season, resulting in a 12th-place finish, but Los Piratas are finding it far more difficult this time around.

In January, with the team in the relegation zone and with two victories under their belts, Alvaro Cervera, who had brought them to the top level for six years, was fired and replaced by Sergio.

Getafe comes into this match having significantly improved their survival chances in recent months, currently sitting 16th in Spain’s top flight. The Azulones slid to the bottom of the division after losing their first eight games and failing to win any of their first 11, but they have turned their season around with six victories and 22 points in their final 13 league games.

The lone absentee for Cadiz should be defender Fali, who missed the previous match due to injury. Los Piratas should field an unchanged backline after a clean sheet, with Carlos Akapo, Luis Hernandez, Victor Chust, and Alfonso Espino likely to once again protect goalkeeper Jeremias Ledesma.

Sergio should rely on Alvaro Negredo to lead the way at the other end of the pitch, with the 21-cap Spaniard having scored four league goals so far this season after scoring eight times in their excellent league campaign last season.  Sabit Abdulai, David Soria, Mathias Oliveira, and Sandro Ramirez are all expected to extend their periods on the sidelines, while Carles Alena was also absent at the weekend.

After their strong performances against Atletico Madrid, Borja Mayoral and Enes Unal should lead the attack once more, with Nemanja Maksimovic, Mauro Arambarri, and Oscar Rodriguez expected to reassemble their midfield trio in Alena’s absence. 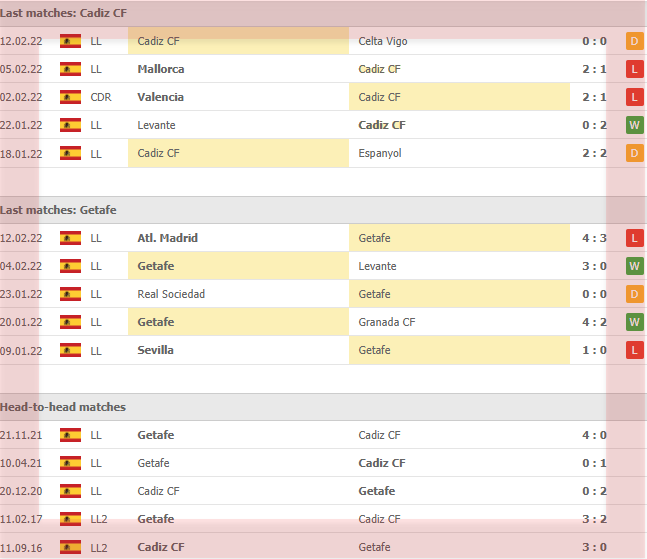