Sampdoria vs Empoli – preview and prediction – team news, and lineups

Sampdoria vs Empoli – Despite a recent slump in form, Empoli leads Sampdoria by eight points and five places in the Serie A standings when the two teams meet this weekend at Marassi.

Samp lag their rivals in the table after a tumultuous season that saw veteran coach Marco Giampaolo return, while the Serie B champions had a strong start to the season but are now on a nine-game winless streak.

Despite the fact that Sampdoria’s solitary win since mid-December came thanks to the re-appointment of former favorite Marco Giampaolo as manager, the Blucerchiati have already lost five of their six Serie A games in 2022.

They have been unable to move away from the danger of relegation, and currently lie 16th in the rankings, two points ahead of 18th-placed Venezia despite having played one game more.

Even though they have recently avoided defeat on the road against Sampdoria, Empoli have failed to win seven of their past eight league matches at Marassi – against either Genoa or this week’s opponents.

Indeed, the Tuscan club has failed to score in three of their last five excursions to the Ligurian capital, so Saturday will not be a comfortable hunting ground for them.

Coach Andrea Andreazzoli will be keen for his team to defy recent history there, as they have fallen to the bottom of the table after a string of poor results.

While both Kristoffer Askildsen and new recruit Sebastian Giovinco had individual training sessions over the week, they are both hoping to be part of the Sampdoria group on Saturday. Maya Yoshida, the Japanese captain, and Mikkel Damsgaard, the Danish winger, are both still out.

Coach Marco Giampaolo may opt for a more attacking strategy this time out after using a 4-4-1-1 formation on his return to San Siro, so veteran forward Fabio Quagliarella is a contender to return to the starting XI.

Antonio Candreva, who has four goals in seven Serie A appearances versus Empoli and also scored in stoppage time at the conclusion of Samp’s last home game, will provide support from the flanks. Meanwhile, Wladimiro Falcone is expected to stay in goal after a great performance in Milan.

On-loan midfielder Valerio Verre is competing with Liam Henderson and Albanian playmaker Nedim Bajrami for a starting spot in support of Andrea Pinamonti forward for the visitors.

Pinamonti, who is on loan from Inter for the season, has nine goals and might become only the ninth Empoli player to score in double figures in a Serie A season. Sebastiano Luperto, meanwhile, should return from a muscular injury in time for the trip, but will most likely start on the bench. 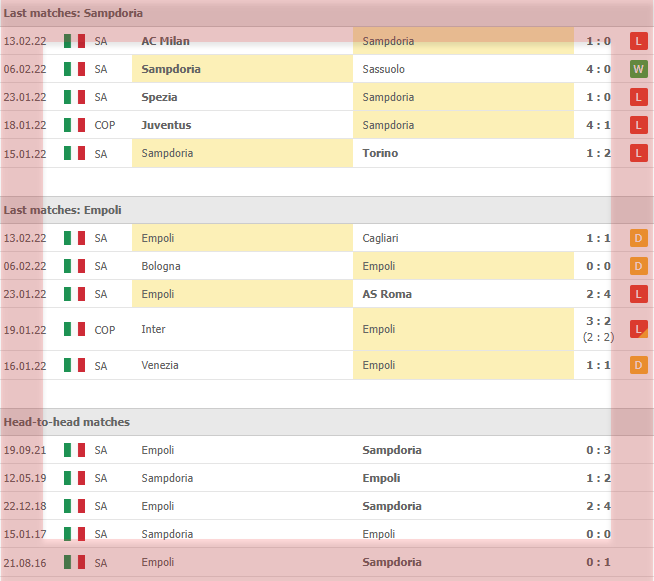