UCD vs Derry – Preview, and Prediction

UCD vs Derry – Two clubs competing at different ends of the League of Ireland Premier Division will square off on Friday, when University College Dublin host Derry City to the UCD Bowl.

In the first half of the new season, University College Dublin struggled mightily after returning to the Irish top division last year. The team failed to win a single game in its first 14 games.

The Students were then eventually able to put a first league win on the board in mid-May, as they defeated Finn Harps 1-0 away from home with Liam Kerrigan hitting the only goal of the game in the closing 10 minutes.

Since then, they’ve failed to add another win to their record, losing to Shamrock Rovers 3-0, and Shelbourne 2-0, before drawing 1-1 with Sligo Rovers to gain a point. Dylan Duffy’s 69th-minute equalizer was enough to earn them a share of the spoils.

Andrew Myler’s men went to St Patrick’s Athletic last time out hoping to improve on their goalless draw against the sixth-placed side, but Alex Nolan’s late goal was not enough to ignite a comeback after Eoin Doyle had put the hosts up 2-0 with a brace.

Their current position at the bottom of the table, two points off of safety and 10 points short of automatic promotion, suggests that the former is the most they can hope for, and they will look to strengthen their prospects of escaping relegation by winning their next match.

They will face a tough test, though, as the visitors enter trying to stem a slump of their own. Derry City made a terrific start to the current league campaign, swiftly putting themselves in the title race as they won seven of their initial nine games while going unbeaten, but they have now hit a harder spell.

After a 7-1 thrashing of Friday’s opponents, and a resounding 4-0 win over St Patrick’s Athletic, the Red and White Army now find themselves without a victory in seven games in the Irish top flight, as back-to-back draws were followed by consecutive defeats at the hands of Shamrock Rovers, Dundalk and Sligo Rovers.

Eoin Toal scored in injury time to earn a draw for them against Finn Harps, and they were held to a stalemate by Drogheda United last time out after Matty Smith’s opener was cancelled out by Drogheda in the final 15 minutes.

Derry, who are now eight points adrift of league leaders Shamrock Rovers and three points adrift of second-place Dundalk, will be anxious to take advantage of a match against the league’s bottom side to get back on track and enhance their position at the top end of the division. 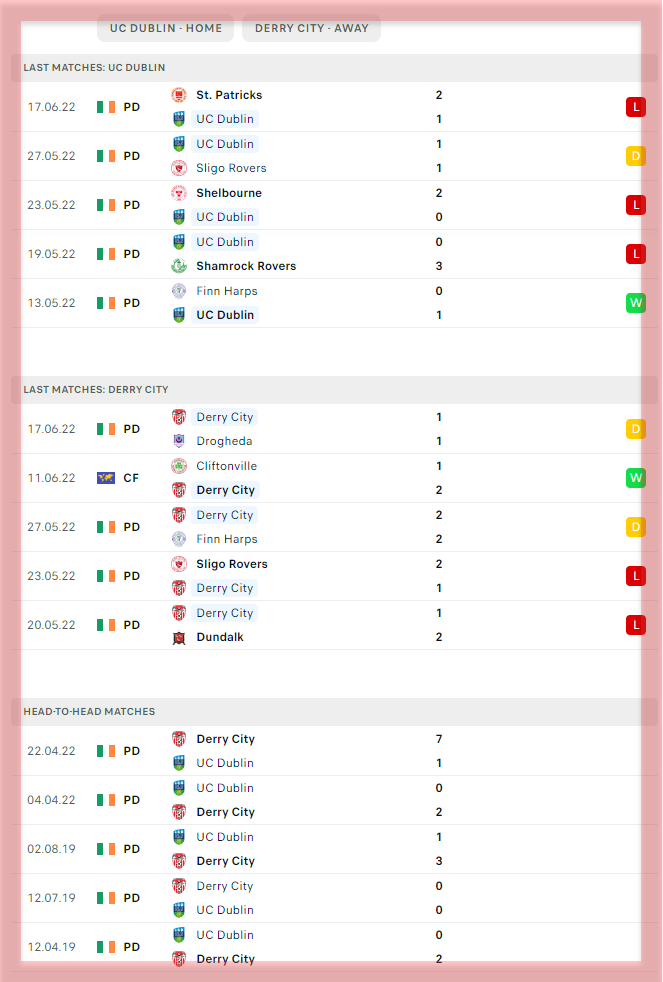