Corinthians vs Santos – Preview, and Prediction

Corinthians vs Santos – Wednesday night’s Copa do Brasil showdown between Corinthians and Santos will rekindle the Classico Alvinegro rivalry between the two teams. Timao beat Peixe 2-0 in front of their home fans in the first of two games between these two teams in the space of a week.

Corinthians, who were knocked out of the Champions League by Atletico Goianiense in the third round last season, are back in the competition’s final 16, although their road there was far from easy.

Portuguesa RJ of Serie D drew 1-1 with Vitor Pereira’s club after conceding the opening goal to Cafu after just one minute of play. Leg two was much easier for Corinthians, as they scored two goals in the first-half and won 2-0 in order to move to the quarterfinals.

Even if Santos lead Time do Povo by seven points nationally, that might serve as a wake-up message for them to never take a side for granted. At home this season, Corinthians have not lost in 15 matches in all competitions, keeping 10 clean sheets in the process.

As a result of their tenacious defense, they’ve allowed the fewest goals in Serie A so far this season (10) and forced opposing teams to make poor mistakes in their penalty area.

Corinthians’ double-pivot midfielders, who push high up the field and use a man-oriented system that has worked effectively, have created the majority of their opportunities.

To keep his Santos club competitive, Fabian Bustos has had to come up with some novel formulas, and he was able to do so this weekend when they drew Bragantino with a goal difference of 2-2.

That match, the Argentine coach’s right-back was unavailable due to injuries and bans, thus Lucas Braga was called into action. As a whole, Santos have been well-structured in recent games, conceding more than one goal only two times in their previous 13 games across all competitions.

Throughout the season, Santos has responded effectively to setbacks, picking up six points this month when trailing by a goal in the second half. When Fluminense Pl and Coritiba met in the Copa do Brasil third-round second-leg tie, they had to show their tenacity to square the score at 1-1 with less than 10 minutes remaining and win 5-4 on penalties.

Santos were the last team to beat Corinthians on their own turf, coming back from a goal down to win 2-1 at the Campeonato Paulista in February, making the current run by Corinthians intimidating for many opponents.

Corinthians vs Santos – Head -to -Head 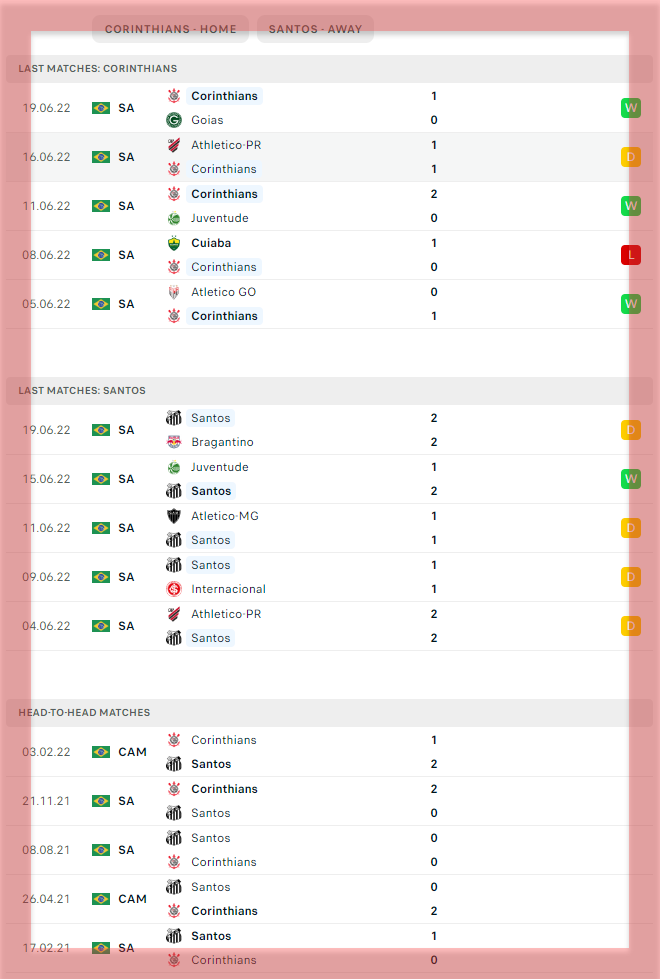