Shamrock vs Derry City – This season, Shamrock Rovers have performed admirably in their games. They have only lost twice this season, both at the start of the season.

Seven of the team’s previous ten matches have resulted in victories, with the remaining three ending in draws. Their excellent play has helped the team secure top place in the league table, with 33 points.

Shamrock Rovers’ most recent match was against Sligo Rovers. In the contest, Shamrock scored three goals while Sligo Rovers only managed one. The final score was 3-1 in overtime.

This season, Derry City has performed admirably in their games. The team has six wins, three ties, and one loss in its previous ten games. They’ve also gone undefeated in their last five games.

With 32 points from their matches, they are now in the upper half of the league table, in second place. The last game that Derry City played was against St Patrick’s Athletic. The game ended in a goalless tie since neither team could score.

Derry City won the previous h2h with a 2-1 FT result, and in the last ten games, Derry City has only won once. Shamrock Rovers have not lost to Derry City in their last seven home games.

Shamrock and Derry City have both performed admirably in recent matches, winning first and second place, respectively. They are a one-point difference apart for first place.

However, Shamrock has won four of their previous five matches, while Derry City has won only two. Shamrock Rovers have been impressive at home, winning four consecutive games.

Despite the fact that both sides have performed admirably in their matches, Shamrock Rovers have a better chance of winning than Derry City.

In the majority of their recent matchups, both clubs have scored above 1.5 goals. As a result, we may expect the game to end with more than 2.5 goals. 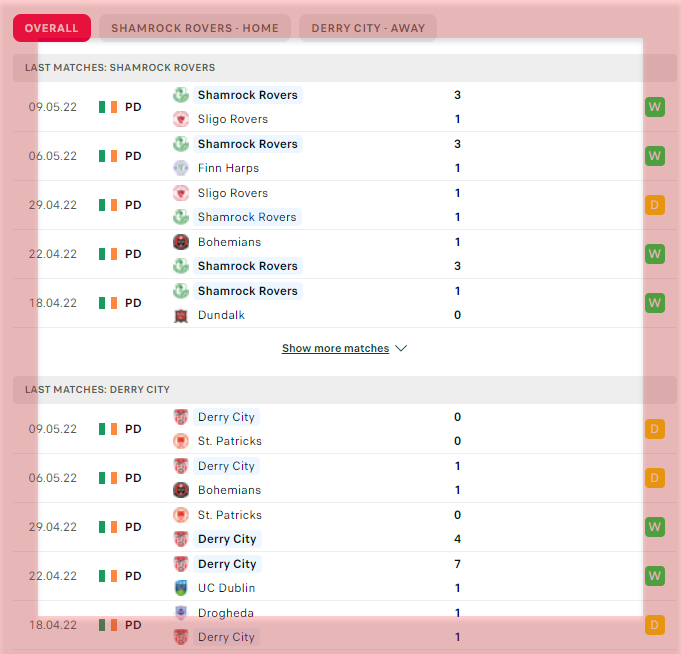 Our Predictions: Home win or Draw