With 71 points from 33 games, the Eagles sit in third place in the standings. They won 22 games in the league, drew five times, and lost six times.

After failing to catch up with Sporting CP, the visitors have secured a place in the Champions League qualifications for next season. With 76 total netting, they are the second best team this season.

Last Saturday, Benfica fell 0-1 at home to Porto, allowing their rivals to win the Primeira Liga on their own field. That defeat ended their four-match unbeaten streak in the league, keeping them in third position in the standings.

They have nothing to play for at this stage and will want to finish the season on a good note. Pacos de Ferreira, on the other hand, is in 10th place on the table with only 38 points.

They won 9 of the 33 league matches they played, drew 11 times, and lost 13 times. They have nothing to play for in this dead rubber of a match on Friday night because they will neither qualify for Europe nor avoid relegation.

The hosts will be hoping for a better result after losing 2-0 to Santa Clara in their last encounter in the Primeira Liga. This was their second loss in the last four games.

Benfica has won the last nine head-to-head meetings with this opponent. Pacos de Ferreira last defeated them in 2015, over 14 hours and minutes ago.

Only one side has scored in five of their last seven encounters, and Benfica triumphed 2-0 in the reverse fixture. In their previous 11 league encounters, the hosts have failed to win against Benfica.

However, they haven’t lost in their last three league games at home. Meanwhile, Benfica has won the last nine head-to-head meetings with this opponent in all competitions.

They’ve also gone undefeated in their last two league away games. We believe an away win is likely this Friday, based on their impressive h2h dominance. 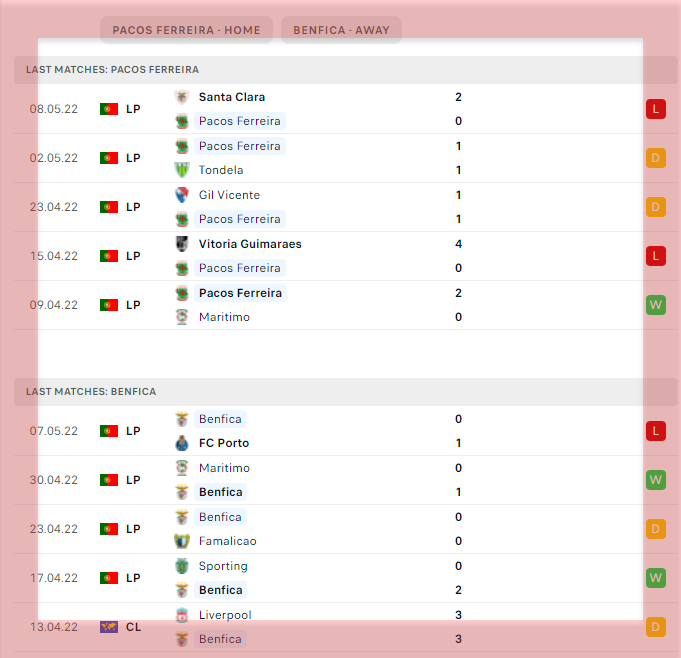