AC Oulu vs Honka – The season has started badly for AC Oulu. Since the beginning of the season, the team has only won once in its games. The team has three draws and two loses from the remaining matches.

Oulu is in tenth place in the league rankings with six points after six games. If the team wants to rise up the standings, they must improve their form.

HIFK was Oulu’s most recent opponent. Both teams scored one goal in the encounter, which ended in a 1-1 FT draw. Honka has been impressive from the start of the season.

Despite losing their first encounter, the team has grown since then and is unbeaten in their last five matchups. Honka has won four, drawn one, and lost one of the six matches he has played so far.

Their current form has enabled the squad climb into the top half of the league table, where they are currently ranked third. They also have 13 points to their credit.

Honka’s most recent encounter was against Inter Turku. Honka scored two goals while Inter Turku only managed to score one, resulting in a 2-1 FT win for Honka.

Honka won their last meeting with a 6-1 FT score, and In the last six matches, Honka has won in a row. Since 2010, Oulu has not won a match against Honka.

When AC Oulu takes on Honka in the forthcoming encounter, they will have a difficult task. Honka has performed admirably in their matches thus far, whilst Oulu has only managed one victory.

Honka has also scored over 1.5 goals in the majority of his games. This season, Oulu has yet to lose a match at home. The team has one win and two losses from three matches played on their home turf.

Honka, on the other hand, has had a mixed bag of performances on the road. They have one win, one tie, and one loss to show for their efforts. With Honka’s current form, the game will almost certainly finish in a win for the visitors.

Their head-to-head matchups and recent matches have all ended with above 2.5 goals. As a result, we may expect the game to end with more than 2.5 goals. 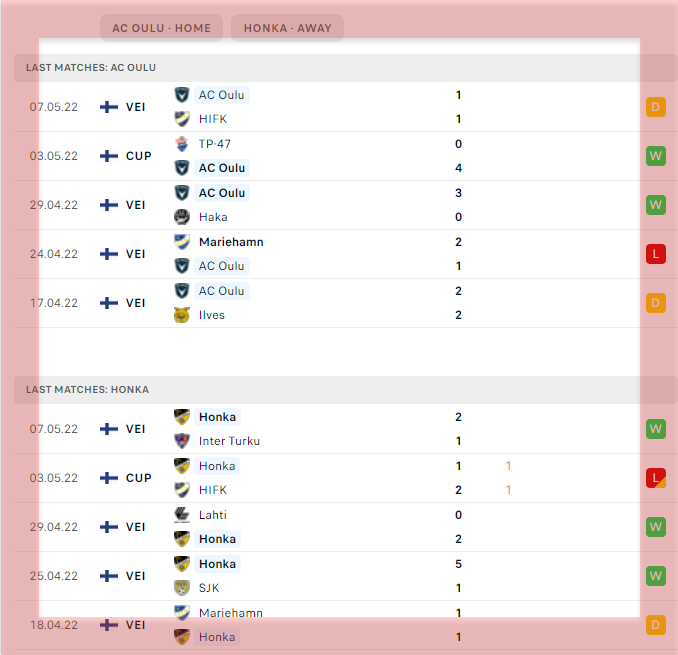