Shamrock Rovers vs Gent – Shamrock Rovers’ UEFA Conference League (UECL) campaign has been a complete failure, and they bear the unwelcome distinction of being the only team left in the league that is still without a group stage goal. Unsurprisingly, they have already been eliminated from Group F (D1, L3) and are now competing solely for dignity in their last home game against a European opponent.

Despite their struggles in Europe, there won’t be any doom and gloom at Tallaght Stadium because Shamrock were crowned Irish champions for a third straight year on Monday night with two games to spare as league rivals Derry lost to Sligo. Given that the Hoops’ matchday four loss to Molde was their first home setback in Europe this season (W4, D1) and astonishingly the first time they had lost a competitive home game in 30 games, this is sure to produce an upbeat environment and could help them recover their mojo at home (W25, D4).

Gent, who is currently in third place and three points behind Molde, still has a chance to advance to the UECL knockout stages, but in order to do so, they must at least match Molde’s performance against Djurgrden at home before hosting them for what they hope will be a pivotal head-to-head in the final round.

Hein Vanhaezebrouck’s team is not in the best of form, especially on the road, where they have won just one of their past six competitive games (D1, L4). Additionally, the Belgians have lost their last five away games in Europe (D1, L4). Despite suffering a 4-2 loss away to Djurgrden, there were at least improvements in attack in their most recent UECL match. Gent scored more than once in a European away game for the first time since a 3-1 Europa League victory at Wolfsburg back in November 2019.

Players to keep an eye on: Graham Burke of Shamrock would hope to end his team’s European scoring slump here after scoring three goals in his last two games. Hugo Cuypers, a Gent opponent, scored in the 3-0 head-to-head victory and has attempted the joint-most UECL shots through four rounds (16). 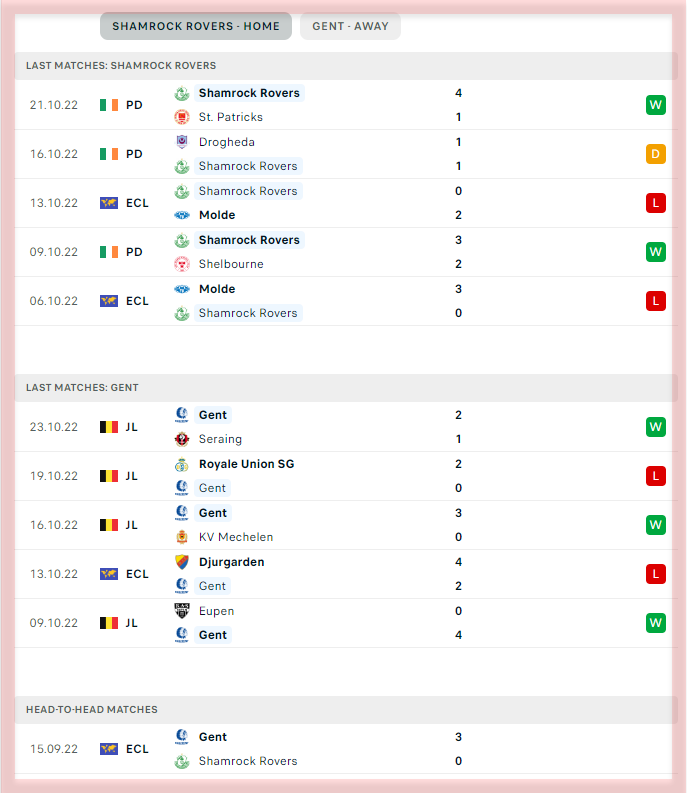