Dnipro-1 vs Apollon – Preview, and Prediction

Dnipro-1 vs Apollon – As Dnipro-1 welcomes Apollon in the penultimate round of Group E of the UEFA Europa Conference League (UECL), Ukraine will face Cyprus. The UEFA group stage debutants have excelled in the actual campaign (W2, D1) and know that they can advance despite experiencing defeat to leaders AZ Alkmaar on matchday one at their temporary UECL home in the Slovakian city of Koice.

They will finish in the top two if they win this game. Of course, they’d prefer a win that puts them in contention for first place, especially with a crucial matchup against Alkmaar on matchday six. In addition, second-place promotion would need a knockout round play-off, which would add to the second team’s workload and threaten Dnipro-1’s slim advantage of three points over Shakhtar Donetsk at the top of the Ukrainian Premier League.

Apollon, who are starting their eleventh consecutive European season, are now in third place and three points behind their rivals. Only win will suffice to maintain hopes of a first-ever UEFA knockouts appearance due to their 3-1 loss in the reverse head-to-head, but it won’t be easy as they have only won once in their past five away games (D3, L1) and were held to a 1-1 draw by Olympiakos Nicosia in domestic play last Friday.

Although this was only Apollon’s second victory in their previous 11 efforts at competing in Europe, they will be encouraged by a 1-0 victory over group leaders Alkmaar on their most recent UECL outing (D4, L5). They have lost ten of their last 14 such games (W2, D2), so there is little reason for optimism when examining their traveling record in UEFA group stage football. Therefore, all hands will need to be on deck if they are to score a key victory here!

Observe these players: Dnipro-1’s forward Artem Dovbyk, who is tied for the competition’s top scorer entering this match (G4), scored the game-winning goal in stoppage time against Vaduz in their most recent UECL match (2-1), while Apollon’s Ioannis Pittas, who has scored in back-to-back away games, will look to continue his scoring streak.

Dnipro-1 vs Apollon – Head To Head 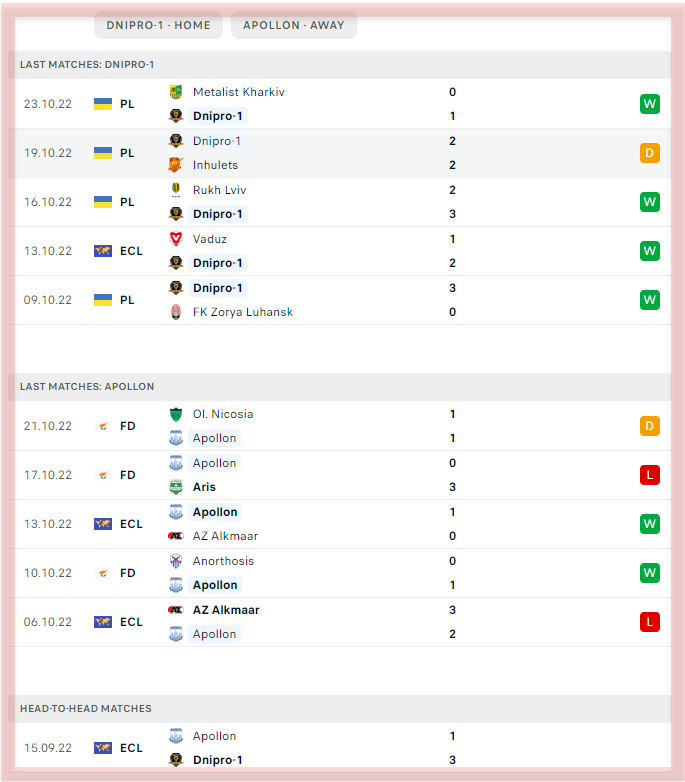