Reims vs Nice- Preview, and Prediction

Reims vs Nice- Following the loss to Nantes in the Coupe de France final and the league defeat to Lille last weekend, Nice might easily miss out on European competitions next season.

The club led by Chris Galtier is presently sixth in Ligue 1, level on points with Strasbourg in fifth place and two points behind Rennes in fourth.

They must beat Reims at Stade Auguste-Delaune II on Sunday evening and hope that Strasbourg does not beat Marseille at Stade Orange Velodrome or Rennes loses away at Lille on the final day.

Despite their defeat to Lille last weekend, Nice enter this match against Reims as clear favourites.

Reims have lost three of their previous four Ligue 1 games at Stade Auguste-Delaune II, thus they have nothing to play for.

Oscar Garcia’s side did, however, defeat relegation-threatened Saint-Etienne on the road last weekend, despite the fact that Les Verts required a result far more than they did.

In the previous three head-to-head meetings between these two adversaries, no goals were scored at all. Five of their previous six H2H matches had ended in a tie.

Only one of the previous 14 meetings between these two sides resulted in three or more goals.

In the history of this contest, goals have been infrequent. On recent trips, Nice has struggled with a lack of efficiency in the final third. In their previous eight away matches in all competitions, they had only scored two goals.

We’ll support the visitors to win at 1.83 odds because they’re in desperate need of points.
However, at 2.10 odds, the Under 2.5 goals FT looks like a good bet, given that only one of the last 14 H2H matches between these two sides saw three or more goals scored. 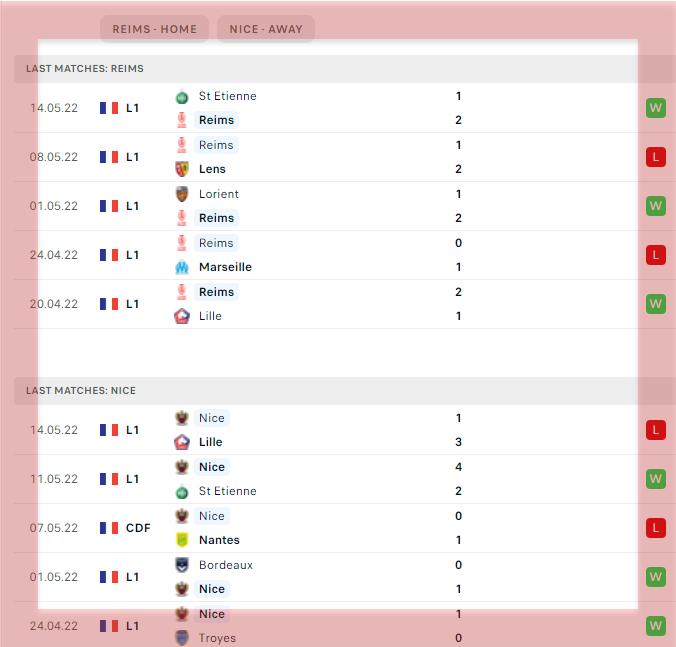