Lorient vs. Troyes- Preview, and Prediction

Lorient vs. Troyes- Last Saturday, Lorient dispelled any doubts about their top-flight fate by holding bottom-placed Bordeaux to a goalless draw at Stade Matmut-Atlantique.

They are now four points ahead of Metz, who are in the relegation playoffs, and have no pressure going into the final day matchups.
The same can be said about their bottom-half opponents Troyes, who are now in 15th place in Ligue 1 ahead of Matchday No 38.

Lorient has been struggling to produce chances up front recently, scoring only once in their last four league games.

Despite the fact that Les Girondins have by far the poorest defensive record in Ligue 1, they did not do much up forward last weekend at Bordeaux.

On the other hand, we have Troyes, who have made a far better impact in recent weeks.
In their last three Ligue 1 games, the visitors have won one, drawn one, and lost one. If we consider that they have faced Lille, PSG, and Lens along the way, it is a decent record.

Troyes has only lost two of their last five league away games, holding PSG to a 2-2 tie at Parc des Princes in the process.

Going into their 23rd head-to-head meeting in recent history, both teams have 9 wins apiece.
Goals were scored at both ends in none of the previous five meetings between these two teams.

Troyes comes into this match on the back of four straight clean-sheet victories over Lorient, including a 2-0 win at Stade de l’Aube earlier this season.

Based on everything we’ve seen from these two squads in recent weeks, the bookmakers have Lorient as slight favourites here, something we strongly disagree with.

The recent H2H record also favours the visitors, therefore we’ll take the away win at 3.30 odds as our major betting option. 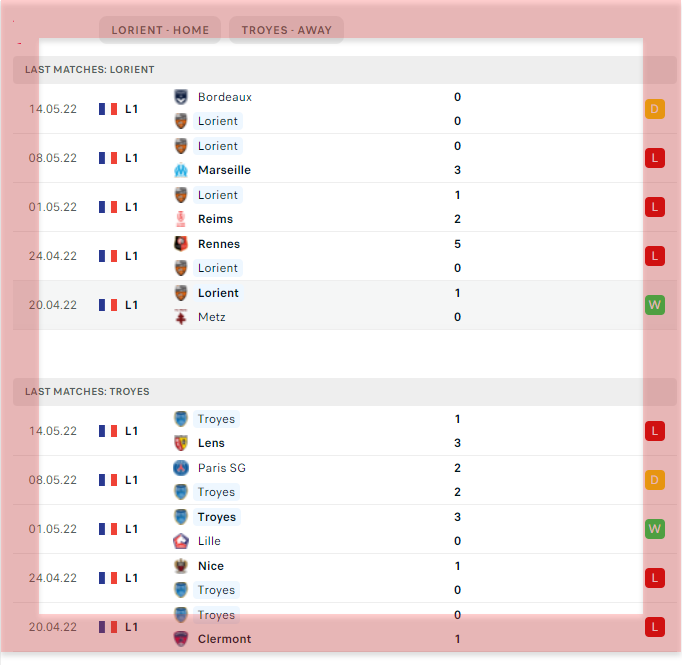