Las Palmas vs Tenerife -The last time Las Palmas celebrated a league victory was back on the 24th of October. Now they are on a four-game winless run. They will now face Tenerife at Estadio de Gran Canaria on Matchday 17.

The main strength lies in the defensive backline this season for the host. They have the second-best defensive record this season only topped by Burgos. This makes them a difficult target for their opponents. In their most recent outing, they had to settle for a 1-1 draw against Levante.

Tenerife finally ended their three-game winless run as they defeated Burgos by 1-0. Now, they are on a two-game winning streak as they got past Huesca by 1-0 most recently.

This puts them in the fourteenth position on the table. It is interesting to note that the visitors have a goal difference of nil at this stage of the season.

The visitors have picked up two back-to-back clean sheets. Not to mention that they are through to the second round in the Copa Del Rey competition, Manager Luis Miguel Ramis’s objective is to secure a win at any cost. This will help the team enter the top ten.

This will be the fourth time both teams will be meeting for this year and the last time the host won at Estadio de Gran Canaria against this side was back in 2021 where their visitors won by 2-1 when these two sides last clashed most recently.

It has to be mentioned that the host have picked up two wins in their last five home games, You can back the following as our first prediction is that Tenerife will win this game by 2-1 – the odd for this tip will be at 15.00 odd.

This is after considering the visitors are on a two-game winning streak against Las Palmas. Also, do note that the host are winless in their last four consecutive outings.

Moreover, our next tip for this game is that Both teams to score – at 2.25 odd. In the last two matches at Estadio de Gran Canaria both teams have scored a combined total of six goals. 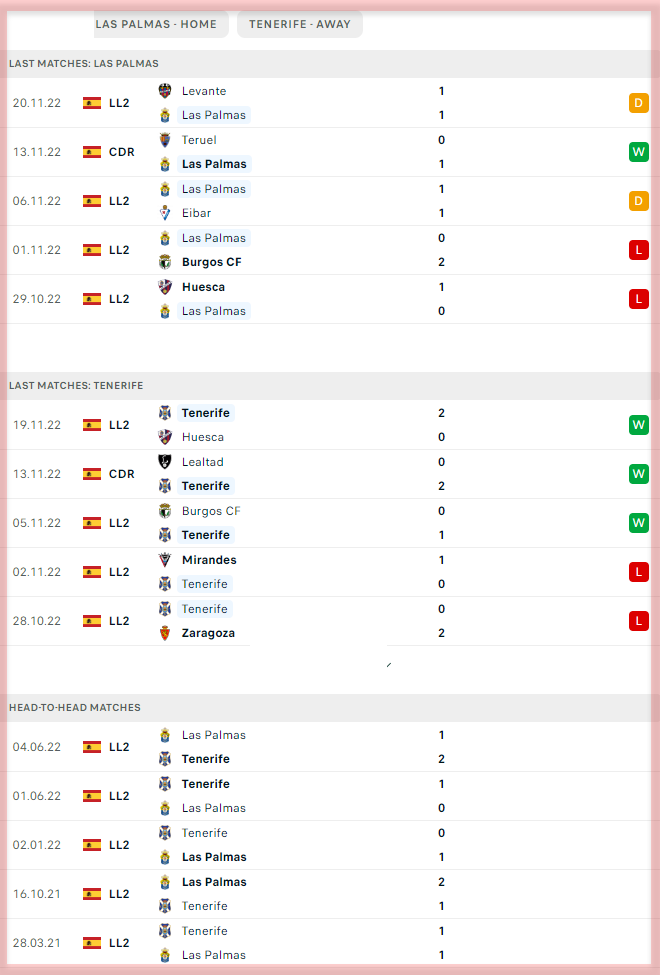