Japan vs Costa Rica -This tournament is turning out to be one of upsets. After the shock Argentina faced, Japan delivered a similar one to four-time champions Germany. They will be determined to keep the streak going, and they could not have asked for a better opponent that the battered-up Costa Rica.

The Costa Ricans had the bad fortune to open against 2010 champions Spain, and it did not end well for them. Not only did the Spanish keep a lion’s share of the possession, but one after the other they slotted in seven unanswered goals.

And to think a star keeper like Keylor Navas will be bringing his World Cup career to a close in such a manner, is quite sad Anyhow, Costa Rica have a huge task at hand now. Not only do they have to win this Sunday, but they have to do it in grand fashion.

A win by a margin of one or two goals is not going to cut it, especially with them having to take on Germany in their next fixture, And this in itself could spell the end of campaign for the team.

The Japanese are on cloud nine now. They had to take on the Germans in their opening game, and frankly no one gave them a chance – not even their ardent fans.

But the energetic youngsters of the team had other plans. They did go behind as Ilkay Gundogan slotted in a penalty. But the team kept on trying. And finally their moment came deep into the second half.

After slotting in the equalizer in the 75th minute, they scored one more against the flabbergasted Germans in the 83rd minute. And despite even Manuel Neuer turning into a midfielder towards the end of the game, the four-time champions were unable to find a second goal.

As things stand, the confident Japanese squad are expected to deliver one more win this Sunday, against the low-in-confidence Costa Rica. And their need to overcome a –7 goal difference is not all going to be good for them, Expect a victory for Japan this weekend at the Ahmad bin Ali Stadium.

The Japanese lost just thrice in the past 12-month period, and one of the losses came against the monstrous Brazilian squad, They are also raring to go once again after delivering a shock defeat to one of the tournament favorites – Germany.

And the Costa Ricans might not have the heart to even turn up for the game, after the way they were beaten by Spain Also, it is in the best interest for the Japanese to make sure of their qualification by end of the second game itself, as their final group-stage fixture is against Spain.

As things stand, anticipate a victory for Japan. And count on the destroyer of German hearts himself, Takumo Asano, to once again find the back of the net for the Samurai Blues. He was all over the pitch during their German fixture, and was a constant thorn on the sides for Manuel Neuer and co. 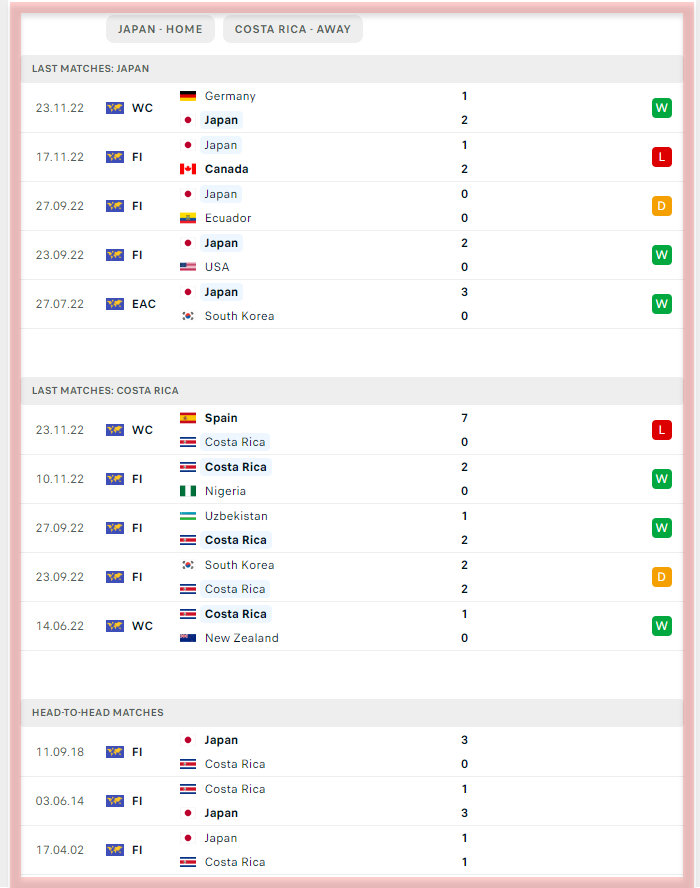