Istanbul Basaksehir vs Trabzonspor -This season, Istanbul Basaksehir has been in good form. Their recent form has been remarkable. They were able to occupy a safe zone slot on the table due to recent unblemished results. They’ll be hoping to clinch it with a win in their final match of the season.

In their most recent league match, Basaksehir drew 1-1 with Giresunspor on the road. With that draw, they have now gone seven games without losing in the league. With the help of home advantage, they’ll try to make it eight in a row.

Meanwhile, Trabzonspor has already won the title and has been celebrating it for several weeks. Their lead over the other Turkish outfits this season is considerable. They will be trying to end their Super Lig season on a high note.

In their most recent league match, Trabzonspor defeated Altay 2-1 at home. With the win, they have now gone six games without losing in the league. However, the majority of those six unbeaten games ended in draws.

Basaksehir has won eight of their last ten matches against Trabzonspor. In five of the last ten head-to-head meetings between these two teams, the both teams to score option has been successful. The reverse match resulted in a scoreless draw.

Basaksehir will be anxious to win this match because the outcome would determine how far they can go in their current run. They’ve been in good form at home recently, and we should expect them to put up a good show here.

Trabzonspor, on the other hand, has been inconsistent on the road recently. They have lost five of their last six league road games. When you combine that with their poor head-to-head record against Basaksehir, it’s evident what the outcome of this match could be.
Based on the information presented above, we believe Basaksehir will win this Sunday’s match. 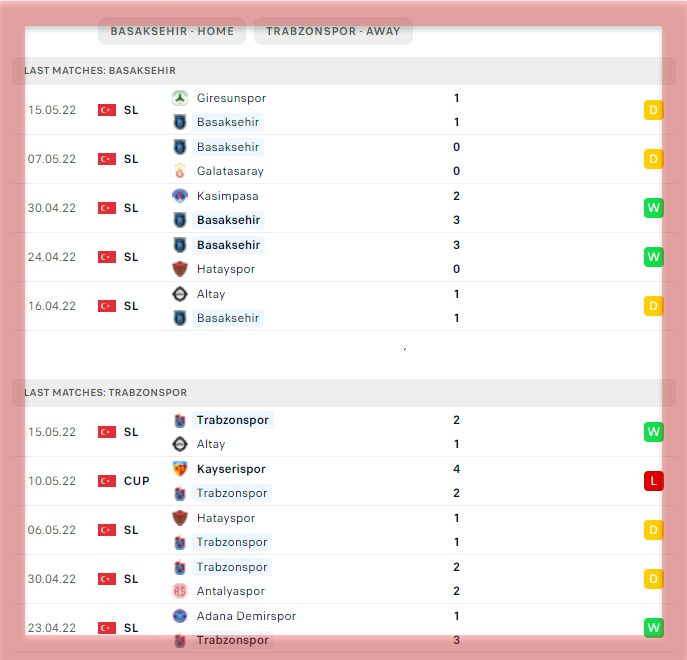